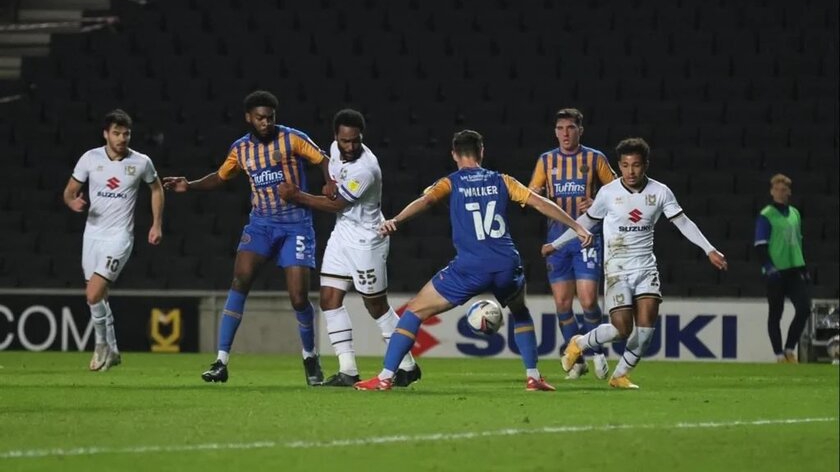 Milton Keynes Dons' valiant efforts saw them battle back from two goals down to claim a point against Shrewsbury Town at Stadium MK.

The match could not have started worse for the home side, who gave the ball away cheaply in their own half, only to see Shaun Whalley charge toward Andrew Fisher's net unchallenged, with his lofted effort beating the Dons keeper and giving the visitors a 1-0 lead after just over half a minute.

Five minutes later and the visitors could have scored an near-identical goal, with another cheap giveaway in the Dons half. A fortunate last ditch block allowed Fisher to scoop up the ball, saving his teammates' blushes.

The Dons struggled to settle into the game in the opening 15 minutes, with a number of scrambles in front of goal, and some moments of uncertainty, with a close-range free kick being their best chance at equalising early on.

A scrappy and frustrating first half was summed up with Scott Fraser being awarded a free kick inside the Shrewsbury half, only to receive a yellow card for his reaction to the foul on him.

Late in the first half, the Dons were twice saved by the linesmen, with two Shrewsbury tap-ins ruled offside, with one in the first minute of extra time extremely tight.

Despite the visitors dominating, the two sides entered the half with the score just 1-0 to Shrewsbury, but many questions being asked of Russell Martin's men.

After making a tactical change just 32 minutes into the match, seeing David Kasumu brought on for Lasse Sorensen, the Dons entered the second half with their second change, seeing Stephen Walker replaced by Carlton Morris.

The Shropshire club, however, were the first to strike after the break, with Marc Pugh smashing home a low-driven shot after just four minutes of play.

Carlton Morris pulled the home side back within one after 53 minutes after Iliev spilled an initial Regan Poole effort from inside the box, with the determined striker, on-loan from Norwich City, smashing the ball in from two yards out.

The Dons were lucky not to go 3-1 down after Richard Keogh gave the ball to a free Shrewsbury player, who attempted a long-range shot with Fisher off his line. Fortunately for the home side, the ball went wide of the goal.

Screams for a handball rang out at Stadium MK as Cameron Jerome lurked in the Shrewsbury box and could have had a chance on goal had he not lost possession, appearing to be tripped for good measure.

After some composed passages of play, Cameron Jerome was the man to bring the Dons level with a coolly slotted home effort inside the Shrewsbury box.

Warren O'Hora began the play with a pass to Kasumu, who slotted a well-placed through ball into Jerome who finished things off perfectly.

With renewed confidence, the home side continued to press forward and Scott Fraser came close to putting the Dons ahead with an excellently taken shot from outside the box, seeing the ball narrowly go over the bar.

Minutes later, Jerome fed a perfect cross into the box for Morris to get on the end of, but the striker was unable to guide the ball goalwards, seeing his effort narrowly go out for a goal kick.

The Dons certainly looked the better of the two sides, even deep into the five minutes of added time, with Fraser having a shot deflected out for a corner and much of the pressure coming from players in white shirts.

The referee's whistle blew after the Dons were denied a late corner, but they will be pleased to have battled back in the manner that they did, earning a point against Shrewsbury, who remain second bottom in the League One table.

The Dons remain in 17th place in the league and will now contest three consecutive away matches, with a trip to Barnet in the FA Cup second round this Sunday (29th November) before travelling to Charlton Athletic and Accrington Stanley next week.