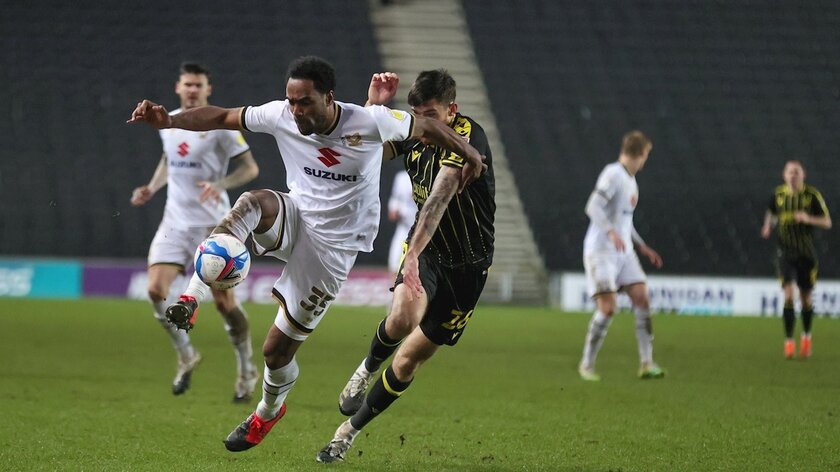 Milton Keynes Dons finally return to Stadium MK on Tuesday, having played their last four matches on the road.

The Dons take on Fleetwood Town at home on Tuesday night, playing their first home match of 2021 with their last contest in Milton Keynes coming on Boxing Day - when the club earned a convincing 2-0 victory over Bristol Rovers.

Russell Martin's men have had some positive results away from home since then, with a solid 4-1 victory over Swindon Town in the league followed up by a fairly routine 2-0 result against local rivals Northampton Town in the Papa John's Trophy.

The quarter finals of the PJT will no longer be split by northern and southern sections, meaning the Dons could face any one of seven teams still remaining in the competition.

The road stint saw a spirited performance against Premier League side Burnley in the FA Cup, with a 95th minute equaliser allowing the top tier club to steal victory later in the penalty shootout, with the Dons' most recent trip to Peterborough United seeing them slump to a disappointing 3-0 loss.

Three positive performances out of the four away matches should have the Dons feeling confident upon their return home, with Tuesday's match against Fleetwood being followed up with a visit from Charlton Athletic a week later - with the likes of Alex Gilbey and Chuks Aneke potentially making an appearance.

It will be a fairly different looking MK Dons side from when the team last played at home, with Carlton Morris, Baily Cargill and Stephen Walker all having left and Richard Keogh on the verge of a move to the Championship, with young striker Charlie Brown joining on a permanent deal after Ethan Laird's loan move.

Despite the significant changes to the side, positive results will still be the expectation as the Dons look to cement their position in the League One table.

The Dons have had their best results at Stadium MK this season, earning 14 points (three wins, five draws, two losses) in ten matches there, and Martin will be keen for his team to hit the ground running on what will hopefully be an improved pitch - with some previously agreed works planned before the team's extended trip away.