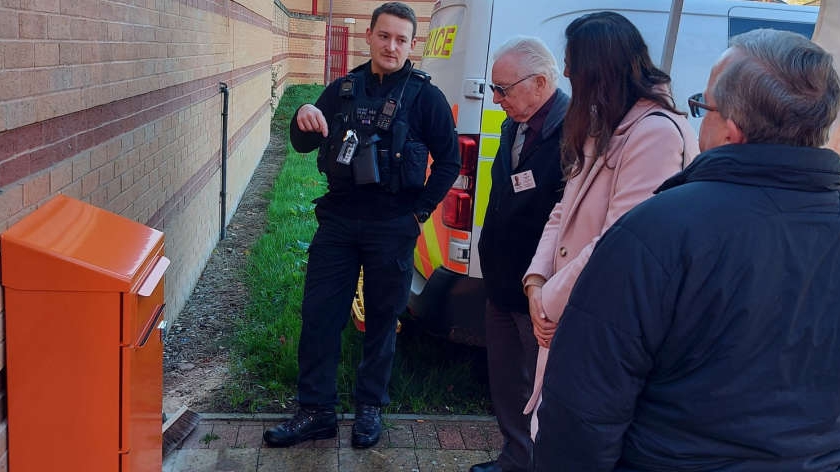 Community amnesty bins are now being placed in Westcroft and West Bletchley, allowing people who own knives or weapons to voluntarily dispose of them in a safe and legal way.

People using the scheme are asked that all knives are safely wrapped in tape and newspaper before placing in the bins.

The secure amnesty bins are bolted to walls and concrete flooring and have a letter box design to allow knife deposits whilst stopping people reaching inside the bins.

Thames Valley Police say that they are being closely monitored and regularly emptied with the contents carefully disposed of.

They can be found at Westcroft Centre, Wimborne Crescent, Westcroft and at the Frank Moran Centre, Melrose Avenue, Bletchley later this month.

Officers from Milton Keynes Neighbourhood Policing Team, councillors and Jason Fathers attended an unveiling of the bin in Westcroft.

Jason’s 18-year-old son Jay was murdered at the beginning of last year when he stepped in to intervene in an altercation and was fatally stabbed five times.

A further amnesty bin is located at Milton Keynes police station, as well as at several police stations across the Thames Valley.

Sergeant Thomas Neilson, based at Milton Keynes police station, said: “This partnership initiative provides our communities the opportunity to safely dispose of their knives and removes dangerous weapons from the streets.

“We know that not everyone will be able to travel to a police station to dispose of a knife or may not feel comfortable heading to such a central location. These community amnesty bins provide a more convenient and discrete way for these weapons to be handed in whilst ensuring they are kept secure until they are emptied by police.

“Tackling and preventing knife crime is a priority for the force and we continue to engage with our communities to raise awareness of the dangers and consequences of carrying a knife.

“If you have any information about the possession of knives or criminal activity relating to this type of crime, please report it online or call 101. Alternatively, you can contact Crimestoppers anonymously on 0800 555 111.”

Next month will see the knife angel in Milton Keynes.

A month of action will be taking place across Milton Keynes this December, aiming to bring together schools and parents, voluntary sector organisations, places of worship, community groups, local venues and businesses to work alongside statutory partners for Milton Keynes.

The community are being encouraged to take a stand together against violence in all forms, including knife crime, domestic abuse, hate crime, bullying and other forms of violence and aggression.

To mark the month of action, Milton Keynes will host the National Monument Against Violence and Aggression, outside Stadium MK.