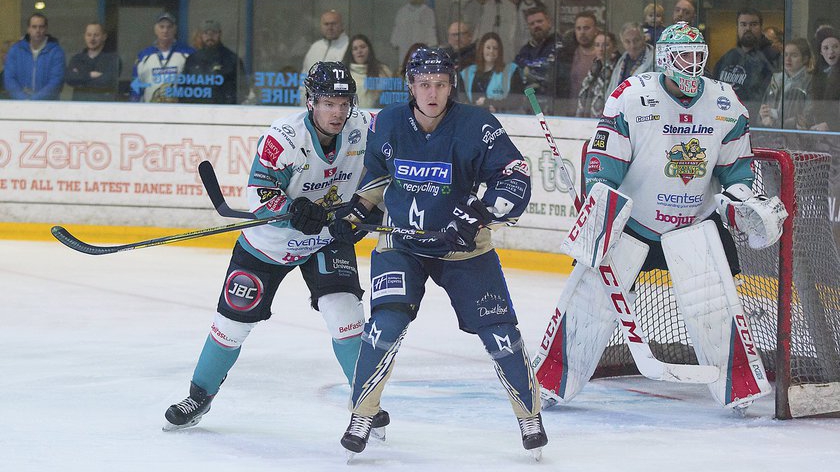 The scoreline, while significantly lower than the previous two outings the Lightning had against the Giants, does not truly represent how close the game was.

The first period saw end-to-end hockey played, with the Lightning having two power-play opportunities and the Giants having a shot ricochet of the post.

But neither team could break the deadlock and the first 20 minutes saw the teams head back to the dressing room tied a 0-0.

The second period started much the same, but it was the Lightning that appeared to have scored the first goal of the game.

The crowd erupted but the referees immediately called for a video review, much to the dissatisfaction of the home fans.

The video evidence showed that the Giants’ goal posts had been knocked off their moorings before the Lightning’s shot had been taken – so the goal was disallowed.

The Giants then capitalised on this and scored within seconds of the deflating decision, sending the visitors up through Francis Beauvillier.

Just over two minutes later and the home side found themselves shorthanded when Eric Neiley was sent to the box for roughing.

The Giants once again capitalised and David Rutherford put the visitors up 2-0.

Despite the two-goal deficit, the Lightning players never gave up and continued to fight for opportunities.

It took them until the fourth minute of the third period to finally beat goaltender Tyler Beskorowany, with Andreas Valdix tapping in the puck cleanly in front of net.

The players continued to battle hard, but a number of decisions made in the final ten minutes of the game swayed things heavily in Belfast’s favour.

Cole Shudra was ejected from the game for a check from behind that saw the Giants’ goaltender try to fight him and led to all players on the ice getting involved in a minor scuffle.

Patrick Killeen also skated up into the Giants’ defensive zone, appearing to comment to Beskorowany – leading to him getting a two minute minor penalty (served by Joonas Huovinen).

Despite a penalty also being called on the Giants goaltender, the visitors remained with five on the ice – scoring their third goal of the night exactly two minutes later through defenceman Guillame Gelinas.

Just over a minute later and the Giants picked up their fourth goal, once again from Rutherford, and it effectively signalled the end of the Lightning’s comeback attempt.

Owen Griffiths was sent to the box for a hooking penalty with just over four minutes left in the game and after Blair Riley was sent down for a cross-check, the Lightning’s Tim Wallace found himself in the box for misconduct.

The game ended with the visitors claiming the full two points but the home crowd acknowledged that the team did well and felt that a number of decisions went against them when it looked as if they shouldn’t have.

After the disappointing loss, star forward Eric Neiley commented: “That’s a frustrating one. I think we out-played them for parts of the game. I don’t know exactly what happened there.”

“Instead of us going up one-nothing, we go down one-nothing. And then, they get the power-play goal.”

“We take it to them in the third and get a goal and then the penalty obviously put any hopes of a comeback.”

With the teams locked at 2-1 with less than six minutes to go in the game, a 4-1 scoreline might flatter the home team’s opponents.

Neiley commented on this, saying: “I guess, maybe. They took advantage of the opportunities. We took some penalties and they capitalised on them.”

“That’s the game but five-on-five we were right with them so, I think, clean up some of the things and tomorrow could be a different story.

With the Lightning having an opportunity to come back against the Giants again today (20th October), Neiley added: “I think we just need to get back to what we were doing in the first fifty minutes of the game. Take away the last ten, with the penalties and all, I think tomorrow will be a good one.”