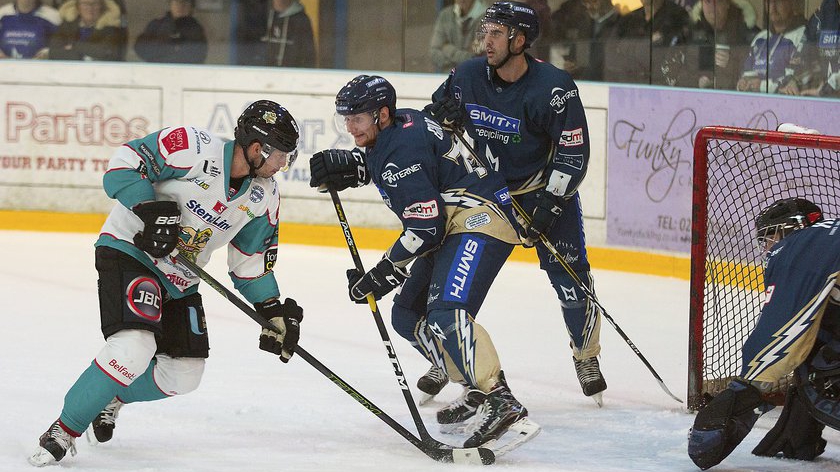 The Lightning entered the game without four of the players that featured in their Friday night game, with Cole Shudra suspended for two games due to a check from behind that occurred in that game.

Defenceman Ryan Lannon and forwards Joonas Huovinen and Gorgs Golovkovs joined David Norris on the sidelines with unspecified injuries that were picked up in the heated Friday night tilt.

With the home team down five players in total, it was always going to be a difficult task overcoming a Giants team on an eight-game winning streak, with their last loss coming at the end of September.

The penalty-filled game started with the two teams playing some nice end-to-end hockey, but a high sticking penalty given to Andreas Valdix in the face-off circle began to set the tone for the game.

The Giants capitalised on the power-play and took the lead through Hunter Bishop just over a minute in.

Eric Neiley was then sent to the box immediately for misconduct, with the referees clearly unhappy with his reaction to the Giants’ first goal.

The Lightning fought hard and killed off this penalty, but found themselves 2-0 down around five minutes later thanks to Blair Riley.

Doug McKay’s team managed to pull within one goal, much like they did the previous night, with Trevor Morbeck’s wrist shot zipping past Tyler Beskorowany.

The first period ended with an astonishing seven penalties handed out, with six of them given to the home side – one that saw Clay Anderson sit in the box for 12 minutes due to a check from behind.

By the time of the Giants’ third goal, a further three penalties were given, two for the Lightning, with Francis Beauvillier taking advantage of the power-play opportunity halfway through the second.

This goal had some questions raised about it, with Martin Mazanec’s stick broken and Tim Wallace appearing to indicate to the referees that there had been a high stick that led to the goal.

The referees deliberated for a moment but waved off the Lightning’s concerns and gave the visitors the goal, much to the disappointment of the home crowd.

The Lightning got their first power-play opportunity a minute after the fourth goal, with Mark Garside being sent to the box for hooking.

Nothing came of this opportunity and the teams entered the third period at 4-1.

Despite the lead and the fact that the Lightning were heavily short-benched in this game, the players kept on fighting.

Tensions began to boil over in the third when the Lightning received a further four penalties, with Martin Mazanec showing his clear frustration when he slammed the penalty box door shut.

The Giants took their fifth goal with 15 minutes left in the game, with Dustin Johner getting his second goal.

American forward Tim Wallace, speaking after the game, commented: “We battled hard, there was a lot of ice time for a lot of guys. It’s frustrating, for the amount of work we put in and the battles.”

Wallace also acknowledged the tremendous support from the home fans, commenting: “The fans were unreal, I’ve played a lot of years and I’ve never really seen a support like this, win or loss, so we’re thankful for that.”

“We’re going to keep working and hopefully we can turn things around.”

The players fought hard against their opponents, but the number of penalties they took had a clear effect on the results.

Wallace appeared to agree with this feeling, commenting: “Yeah, two nights in a row for sure. We’ve got to stay out of the box.”

“We had one power-play all weekend, maybe two, so we’ve got to stay out of the box and go to the net and draw penalties and that comes from being smart.”

“Maybe some of the guys are a little tired from the amount of ice but we’ve got to stay out of the box.”

Injuries are always a part of sports such as hockey, but losing three guys effectively overnight, along with Shudra’s suspension, and it makes life hard on a team.

When asked if any of the injured players might be ready to play today against Coventry, Wallace commented: “I have no idea. It’s crazy, one night we’ve got a full squad and things are going good, next night we’re four out.”

“That’s hockey, we’ve got to battle through it but hopefully we’ll get some numbers back soon.”