PREVIEW: MK Lightning looking to bounce back against Guildford in Challenge Cup 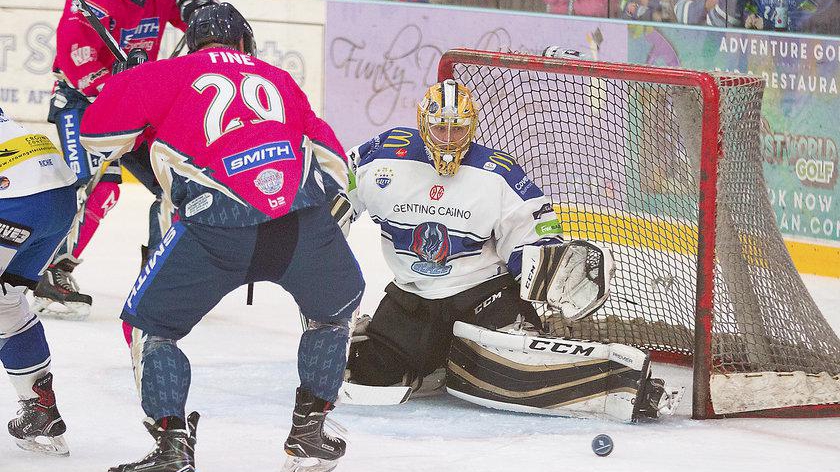 The Smith Recycling Milton Keynes Lightning will be looking to bounce back from last Sunday’s Challenge Cup defeat when they face the Guildford Flames at Planet Ice MK Arena this Saturday.

The Lightning took a 9-1 away loss to the Cardiff Devils but had earned a 4-2 victory at home to the Coventry Blaze the previous night.

Doug McKay’s team are still without defencemen Martin Mazanec (suspension) and Nelson Armstrong (visa) and were without forward Owen Griffiths, leaving them heavily short-benched against the reigning league and playoff champions.

McKay himself came out and defended his young team after the heavy loss, commenting on the team’s official website: “Cardiff are just on a different level and that’s what we have to work towards.”

“Don’t forget we are the same team who beat Sheffield away last weekend. I am with them – and I believe in them.”

“We were wiped out after the win last night [against Coventry], but they’re giving everything they have.”

“They’re good guys – they’re playing hard but we are up against a team that’s just on another level right now.”

The status of Griffiths’ injury is still not known, but the team are expecting the aforementioned defencemen to be available for the team’s away trip to Manchester on Saturday 29th September.

The visitors, meanwhile, also suffered a defeat – losing a 4-1 Elite League home tilt against the Fife Flyers on Tuesday.

The two teams are sporting very similar statistics so far this season, with the same number of points in both the league and cup.

Saturday’s home game will be the first time the teams face each other competitively this season, with both having plenty to prove.

The Lightning have relied heavily on goaltender Patrick Killeen this season, with the Canadian showing everyone in the league why the team brought him over from Italy.

For the visiting Flames, Jon Dunbar and Kruise Reddick have established themselves as their top threats, earning a combined 12 points across the team’s four appearances so far this season.

McKay's men have shown early promise this season, earning wins against the Sheffield Steelers and Coventry Blaze and should be looking to take full points from their upcoming game with Guildford.

The Lightning and the Flames are separated only by goal difference in both the league and cup and a win for either team will see them climb the Challenge Cup Group C standings, improving their chances of qualifying for the next round.

The former EPIHL rivals will no doubt provide plenty of sparks in front of the home crowd and there should be plenty of belief that the Lightning will leave victorious if they continue to put in the hard work that have already shown this season.