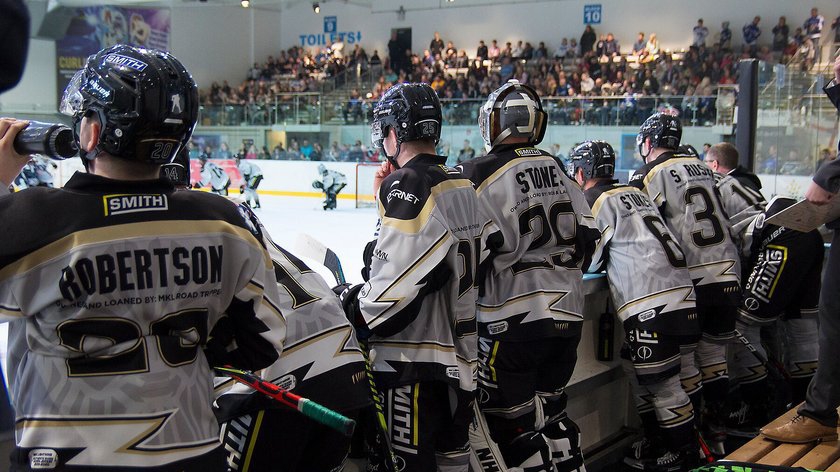 The Milton Keynes Lightning began their pre-season with a hard-fought 6-5 loss to the Sheffield Steeldogs in front of a bumper home crowd.

2154 people were in attendance to see the Lightning in action and the home side were on the offensive from the get-go.

The Lightning’s top forward line of Cale Tanaka, Russ Cowley and Tomas Kana tested goaltender Dmitri Zimozdra within the first minute and looked to be on top.

A power-play opportunity after just one minute and seven seconds gave the Lightning even more momentum, but they were unable to convert their chances.

The Steeldogs had their own chance on the power-play when Leigh Jamieson was sent to the box for roughing, having reacted poorly to a Steeldogs player’s behaviour in front of their own net.

The Lightning held firm to kill off this penalty and just two minutes after Jamieson returned to the ice the home side took the lead thanks to Caly Robertson’s smooth puck handling skills, which saw him pass two Steeldogs players before slotting the puck in the net.

Unfortunately, the lead didn’t last long, with Cameron Brownley tying things up for the visitors less than two minutes later.

The Lightning were given two great opportunities to take the lead with back-to-back power-play opportunities, but it was the Steeldogs’ Kieran Brown that took advantage of poor defensive positioning to score a shorthanded goal on a breakaway.

The sides went in at the break with the visitors holding onto a 2-1 lead, but it was the Lightning that scored first in the second.

While the Lightning were on the penalty kill, James Griffin stripped the puck away from one of their players, taking the puck down the right wing.

The defenceman managed to send a perfect pass across the ice to Rio Grinell-Parke, who slotted home the shorthanded goal and bring his team level once again.

Just over ninety seconds later and the Lightning took the lead once again, with Ari Narhi earning the power-play goal to put the team up 3-2.

A well placed shot from Jan Denececk three minutes later brought things level before the Steeldogs once again jumped ahead through Alex Graham.

Nerves began to set in at times around the arena, but Tanaka helped the Lightning head into the final break on level terms after tapping in Cowley’s pass with the net wide open thanks to Zimozdra committing himself on the opposite side.

Unfortunately, the Lightning wouldn’t take the lead again in this game with Kieran Brown taking full advantage on the Steeldogs’ five-on-three powerplay before Ashley Calvert extended the lead to 6-4.

Narhi earned his second goal of the game, seeing his shot slide beyond Chris Warburton, who had been brought out to start the third people in relief of Zimozdra.

In the dying seconds of the game, the Lightning had a great opportunity to try and tie things up, but the team’s shot was blocked and sent down the other end, flying past the empty net.

Despite the loss, the Lightning performed well throughout the game and could easily have been the team to come away with the W.

A few defensive miscues may have allowed the visitors to take the lead, but pre-season is there to show what teams need to work on and improve ahead of the regular season.

The top forward line looked threatening throughout the game and it was positive to see the likes of Grinell-Parke stepping up to the occasion.

The Lightning now travel to face Sheffield in their own arena later today with the Hull Pirates visiting Milton Keynes next Saturday in another pre-season game before taking on the Pirates in the regular season opener on Saturday 21st September.