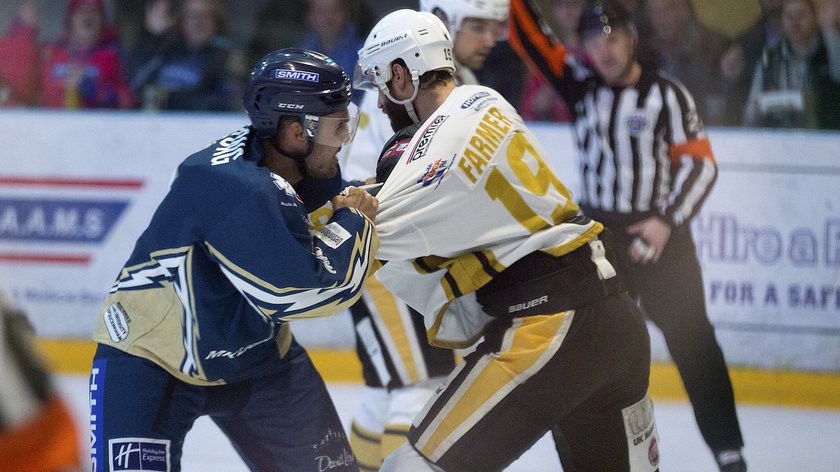 The Smith Recycling Milton Keynes Lightning earned an emphatic 5-1 victory over the Nottingham Panthers in a fiery game that saw tensions boil over multiple times.

The Lightning (3-5-0), who continued to be without defenceman James Griffin and forward David Norris, were on the front foot against the Panthers (7-3-0) from the get-go.

Owen Griffiths had a breakaway chance early in the first period, but was unable to beat goaltender Michael Garnett.

Armstrong, who has been waiting to join his new team since his signing was announced in August, made a huge impression on both his teammates and the home crowd.

After Gorgs Golovkovs was hit late, Armstrong dropped the gloves with British international Robert Farmer – standing up for his new teammate.

The pair were assessed a standard five-minute penalty for fighting, Farmer also receiving two for interference, but Armstrong was given a further two-plus-ten for instigating – much to the displeasure of the home fans.

Both teams ended the first period at 0-0, but it was just over two minutes of perfection for the Lightning in the second – with the team scoring four goals in quick succession.

The first came on the power play, with the Panthers adjudged to have too many men on the ice, with Eric Neiley combining with Tim Wallace and Andreas Valdix to slot a wrist shot into the back of the net.

Radek Meidl added a second just 32 seconds later, with the team now in full swing and the visitors scrambling to deal with the high-intensity attack.

Michael Fine scored 40 seconds after Meidl, with Wallace and Neiley combining again to provide the assist for his first league goal this season.

Neiley scored his second of the game just over a minute-and-a-half later, this time with Fine working with Valdix to set up the American.

Tensions grew as the Lightning took control of the game, with Guillaume Lepine’s check to Neiley’s head not being spotted by the referees.

Clay Anderson and Lepine dropped the gloves for the second fight of the game, with Anderson being brought down and the pair being assessed two fighting major penalties.

But by this point, the Lightning were flying high and the Panthers didn’t seem to have any answers – being outshot 23 to 35 by the end of the second period.

The game began to turn in the Panthers’ favour early in the third, with Luke Pither breaking Patrick Killeen’s attempt at earning a shut-out.

A hit along the boards from Jaynen Rissling prompted recent signing James Hounsome to drop the gloves for the third fight of the game, with the 19-year-old Brit receiving a forceful punch to the eye – forcing him to leave the game with eight minutes left on the clock.

With just over two minutes left in the game the Panthers decided to pull Garnett in favour of six skaters, but this strategy proved to be the final nail in the coffin for the visitors.

After holding possession in the Lightning’s defensive zone, Wallace claimed the puck – taking it up to the halfway point before sending the puck into the empty net, earning his fourth point of the night.

The clock ran down and the crowd erupted at the final buzzer, with the home team fully deserving the full two points after suffering heavy losses in the previous two nights.

British forward Owen Griffiths spoke of the win and the team’s recent trip to Belfast, saying: “We needed that as a group, tough weekend Friday, Saturday, and Sunday games. It’s never easy, especially against a good side like Belfast.”

“It’s a good experience to go away and play there, they’re a good club, but I think we bounced back strong and showed what we’re made of.

“When we’ve got numbers and got a full squad I think we’re a threat.”

He added: “Those little trips you look back on and you laugh about or, like tonight, I’m sure we’ll look back at the rest of the season and we’ll think we’ve had two tough games where things didn’t go our way.”

“We were short benched and yesterday [a 7-0 loss] just wasn’t in our hands, and then we’ve bounced back with a really good performance, a good win, and the scoreline reflected that.”

“I think the boys are happy now and the changing room’s happy, so it’s good.”