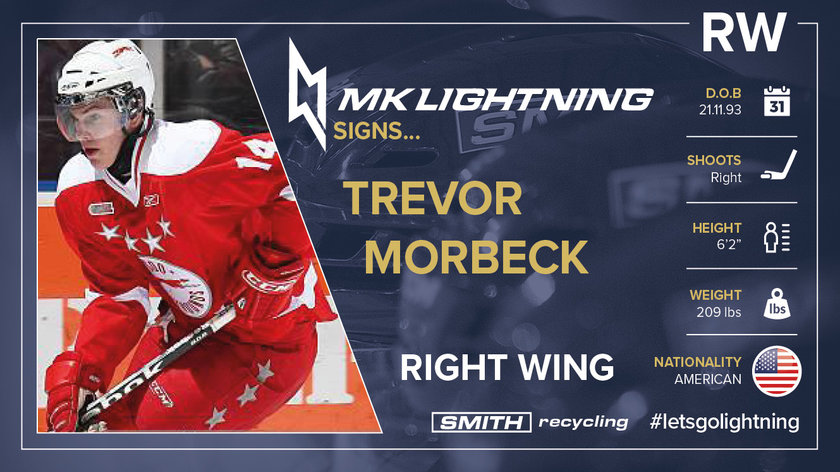 Milton Keynes Lightning completed their triple-header of new signings with the announcement that American winger Trevor Morbeck has joined the club.

24-year-old Wisconsin native Morbeck joins the Lightning after spending the past four seasons at the University of Guelph, where he was studying Food, Agriculture & Economics.

Prior to his days playing collegiate hockey, Morbeck spent four seasons in Canadian major juniors, playing in the Ontario Hockey League, having been selected by the Sault Ste. Marie Greyhounds in the 3rd round (60th overall) of the 2009 Priority Selection Draft.

In 127 regular season games with the Greyhounds, Morbeck posted 34 total points (15 goals, 19 assists) before moving to the Kingston Frontenacs.

He posted better numbers with the Frontenacs, earning 13 goals and  35 total points in 59 regular season games.

After performing well in Kingston, Morbeck once again moved, this time to the Oshawa Generals, where he earned 11 points in his 34 games there.

After his four years in major juniors, Morbeck spent a single season playing for the Muskegon Lumberjacks in the USHL, where he was given the honour of being an alternate captain.

Standing at 6'2" and weighing 209lbs, Morbeck will bring a physical presence to Lightning’s offensive threat.

His OHL scouting report praised him as being “a big winger with some physical tools - he skates well for a bigger man, hard to move in front of from the net.”

The 24-year-old American is now looking forward to developing his game under the direction of Milton Keynes Lightning head coach Doug McKay.

He commented: “I am excited about joining up with the MK Lightning. Doug has a lot of experience coaching where he will help me grow and develop as a player."

He concluded: "I am really looking forward to the opportunity to play alongside elite athletes, living in a different country and learning the culture and history that comes with it.”