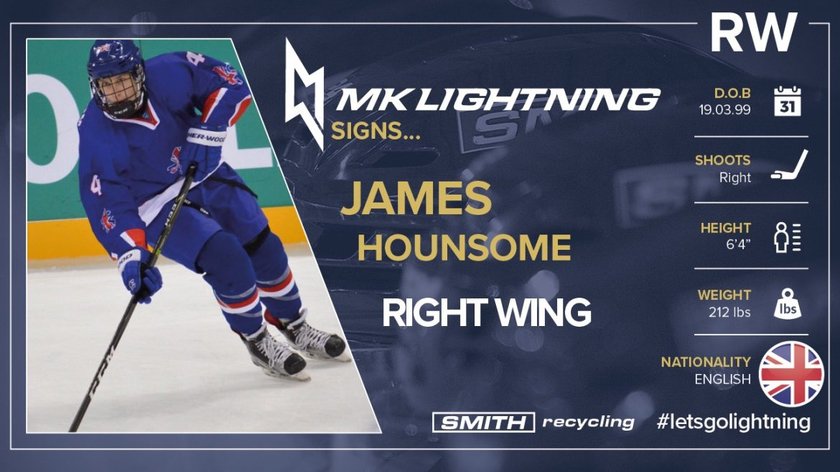 The Smith Recycling Milton Keynes Lightning have announced the signing of young British forward James Hounsome ahead of their first away game against the Belfast Giants.

Hounsome, 19, joins the club from American club the Boston Junior Rangers, who play in the Eastern Hockey League.

Born in Portsmouth, the 6-foot-4, 212lbs right winger played two seasons with the highly rated Okanagan Hockey Academy in the UK between 2012 and 2014.

He then moved to Canada where he honed his skills with at youth level, joining the Everest Academy in 2016.

After spending a year in the academy, Hounsome represented Great Britain at Under-18s level, in the 2016-17 World Junior Championships (Division 2A).

During his time with the national team, he played alongside NHL draftee Liam Kirk and Milton Keynes Thunder forward Rio Grinell-Parke, who has iced for the Lightning at times this season.

His young career then took him to Boston in the United States, where he played for the East Coast Spartans Under-18s teams – also featuring four times in the North American Hockey League with the Brookings Blizzard.

Now his fledgeling career sees him return home to get a real taste of professional hockey for the first time – providing some much-needed depth for a Lightning team that is still awaiting the arrival of Canadian defenceman Nelson Armstrong.

Lightning head coach Doug McKay commented on his new signing, saying: “James has trained with the Lightning for a week and I’ve seen enough to know he has promise and is worth investing our time and efforts in.”

Hounsome steps into the Lightning line-up immediately, ready to play in the team’s doubleheader against the Giants as well as the team’s home fixture against the Nottingham Panthers this Sunday.