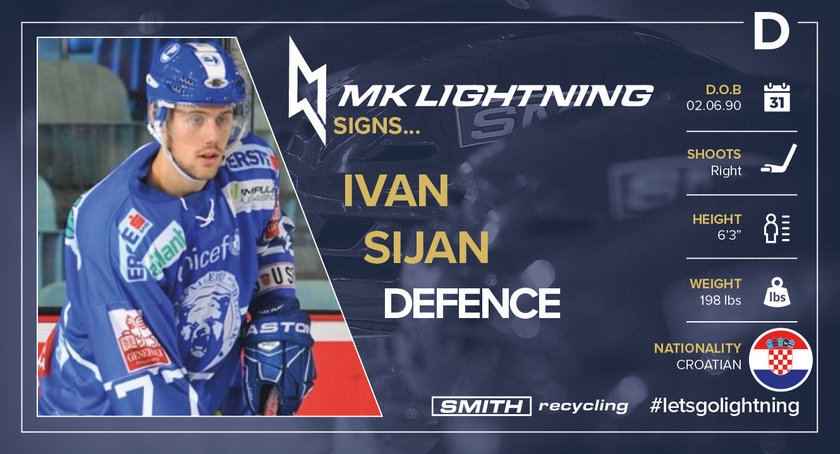 The Smith Recycling Milton Keynes Lightning have bolstered their defensive ranks with the signing of Croatian defenceman Ivan Sijan.

The 28-year-old right-hander joins the Lightning with a wide range of experience across Europe, having played in Denmark, Sweden, Norway and Austria as well as his native Croatia.

Most of Sijan's playing experience comes with Medvescak Zagreb of the EBEL, a league comprised on teams from Austria, Croatia, Italy and the Czech Republic, where he made 161 regular season appearances for his hometown club.

Standing at 6-foot-3, 198lbs, Sijan adds a large body for the Lightning blue-line and brings with him a wealth of international experience, having represented his country at all levels - winning bronze, silver and gold medals at the World Championships (Division 2A and 2B).

Speaking to the Lightning's official website, newly appointed player-coach Tim Wallace said of his new signing: “Ivan is a big right-handed defenseman who can skate really well. His speed and first pass should help us.

“He has a good shot and has an offensive upside as well. He wasn’t given much of an opportunity in Austria and I’m excited to see what he can do here in Milton Keynes.”

Sijan will wear the #71 jersey for the Lightning and his signing is subject to clearance from the IIHF. Should his registration go through smoothly, Lightning fans could expect the new big-bodied defenceman to be in the line-up for the team's road trip to Nottingham tonight.

The Lightning's next home game comes this Saturday when the team welcomes the Manchester Storm to Planet Ice MK Arena, in what could be Sijan's home debut.