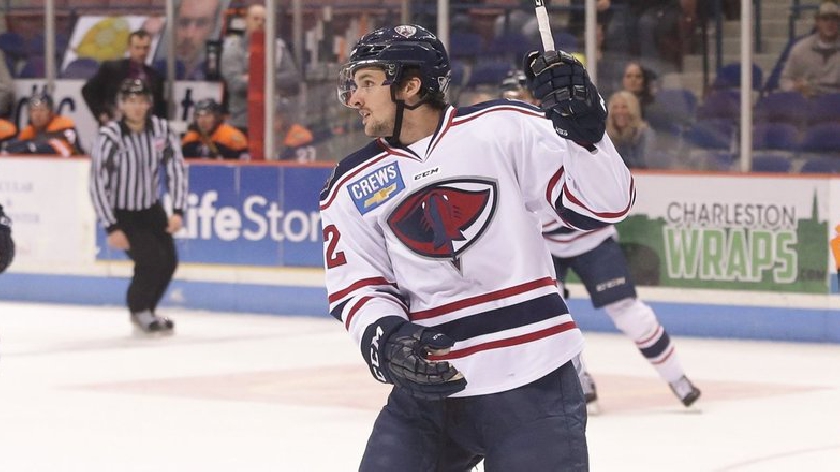 Baillargeon joins the Lightning from the Tulsa Oilers of the ECHL, whom he had joined just 17 days ago – having been traded by the Orlando Solar Bears for defenceman Zach Todd.

The 24-year-old American brings with him a wealth of experience at the college level as well as 30 regular season appearances in the ECHL with the Oilers, Solar Bears and South Carolina Stingrays.

The Enfield, Connecticut native holds the distinction of having been draft by an NHL team, being a fifth-round pick (136th overall) by the Ottawa Senators in 2012.

He was drafted off the back of a stellar campaign with the Indiana Ice of the USHL, registering 48 points (14 goals, 34 assists) in 54 regular season games.

He spent another season in the USHL with the Ice and Omaha Lancers before joining Boston University.

Between 2013 and 2016, Baillargeon played 101 times in the regular season for Boston, earning 19 goals and 55 total points, as well as a Hockey East championship title, before spending a year with Arizona State University.

After graduating, Baillargeon joined the Stingrays last season and registered nine assists in 21 games – leading to a trade to the Solar Bears, where he earned four assists in eight regular season games before registering one assist in six playoff bouts.

Baillargeon was re-signed by the Solar Bears before being traded to the Oilers, where he made one appearance before opting to bring his talents to Milton Keynes.

The 6-foot, right-hander joins a Lightning team currently sitting at 3-7-0 in the Elite League and will be a direct replacement for Finnish centre Joonas Huovinen, who departed the club for personal reasons this week.

The move also sees him reunited with former Arizona State teammate David Norris, who reached out to recommend the Lightning as a possible destination for Baillargeon.

He is expected to be in the team's line-up during their upcoming three-game trip to Scotland, facing the Dundee Stars, Fife Flyers and Glasgow Clan before making his home debut against the Guildford Flames on Saturday 3rd November.

Speaking of his latest signing, MK Lightning head coach Doug McKay commented: “Robbie comes very highly recommended.  He has a reputation as relatively quiet but a good guy to have in the locker room - skilled, extremely competitive and determined to succeed."

“I’m happy to be able to give him his first chance in the British game and I’m sure that our fantastic fans will welcome him on board.”