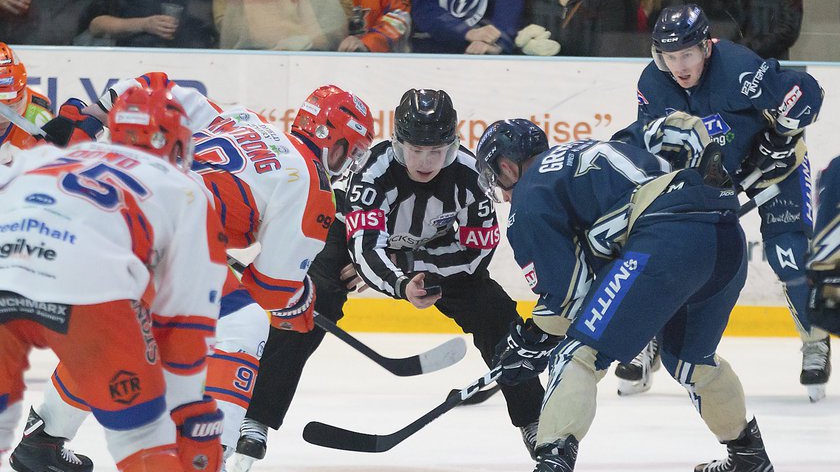 The Smith Recycling Milton Keynes Lightning fought hard but were unable to keep their opponents at, suffering a 4-1 defeat to the Sheffield Steelers last night.

The game was the first in a home-away series this weekend, with the Lightning travelling up to the FlyDSA Arena later today.

The Lightning’s injury issues continued in this game, with David Norris still sidelined along with Martin Mazanec and Trevor Morbeck (flu).

Rolling three forward lines and just four named defencemen, the Lightning were always going to be in for a tough night – but they battled and compete on virtually equal footing with the Steelers throughout the game.

The home side had a power-play opportunity midway through the first period after Anthony DeLuca was sent to the box for slashing.

The opening period saw both teams have some dangerous chances, with Lightning goaltender Patrick Killeen making some huge, athletic saves to keep things tied up heading into the break.

The Steelers applied plenty of pressure throughout the game and were rewarded with the opening goal of the game – a clean wrist shot coming from debutant Tom Zanoski after half an hour of play.

The visitors’ lead didn’t last long, however, as Robbie Baillargeon pulled the Lightning back in front while on the penalty kill – with Tim Wallace in the box for slashing.

Collecting the puck in the neutral zone, Baillargeon picked out linemate Andreas Valdix, who took the puck to the net before coolly slotting a pass across to the American to tap in his 17th goal of the season.

The teams kept things tied up at 1-1 all the way up until the final six minutes of the game, where penalties, questionable non-calls from the officials and three goals sealed the win for the Steelers.

The first of those goals, coming from Robert Dowd took an unfortunate deflection off Killeen’s pads, slipping behind the big Canadian goalie, much to the surprise of many in the crowd.

The next came after Wallace was sent to the box, being adjudged a hooking penalty for what appeared to be a simple stick lift – something that both teams had done throughout the game with no previous issues.

Dowd once again struck after a scramble in front of the net saw the puck fall to his feet for a simple tap in.

With the Lightning two goals down with just over a minute left, Killeen was pulled to give the home side the extra man advantage.

Baillargeon appeared to have been the victim of a dubious hit from the Steelers, with the officials making no call but the Steelers managed to send the puck down ice into the empty net.

The Lightning’s top goalscorer was then ejected from the game with 15 seconds left after clearly expressing his displeasure with the officials’ lack of calls in the lead up to the fourth goal – with Harry Ferguson the victim of boarding earlier in the game, once again receiving no call from the officials.

The 4-1 scoreline does not truly reflect the efforts of the players on the ice, with a bounce here or there potentially turning the game on its head and seeing the Lightning claim points instead.

Speaking after the game, player-coach Tim Wallace commented: "They scored with the last six minutes, it was a hard-fought battle."

"The start was pretty even and we had some chances, and so did they, but it came down to a point shot goes off their stick and in, so it's a pretty tough pill to swallow."

"It was a pretty even game throughout until the last six minutes."

With the team also missing some key regulars, the likes of British youngster Harry Ferguson was called upon more often in this game.

Wallace felt that the young Brit steppe up well playing on the third line, commenting: "I think Harry played good. It was Owen [Griffiths], Radek [Meidl] and Harry on that line and they didn't give up anything and they had some chances."

"That's all you can ask for. They had a pretty solid game. Harry, he played smart, played strong so I thought it was a good game for him."

The Lightning now head up to Yorkshire to take on the Steelers in their own back yard, hoping to enact revenge and claim some points before returning in preparation for Thursday night's tilt with the Glasgow Clan.