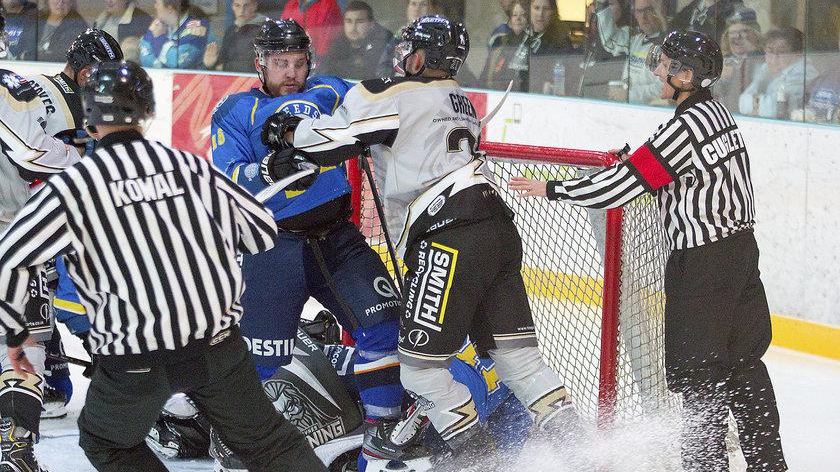 The game had everything you could possibly imagine, with both sides fighting back to take the lead throughout, penalties galore and a lot of tension leading to a few scraps on the ice.

After allowing three goals in the opening 12 minutes last Saturday, the Lightning began the game with more poise and concentration and even took the lead first - with the Chiefs seeing an earlier goal ruled out for goalie interference.

Harry Ferguson took the puck in the neutral zone before offloading it to Leigh Jamieson, who drove towards the net and slotted a clean wrist shot beyond the reach of goaltender Sam Gospel.

Despite taking the early lead, the Lightning also led in one other category - penalties. Heading into the first intermission, the home side had already racked up six penalties, with Jamieson himself sitting in the box to begin the start of the second for a late hit in his own zone.

The visitors continued to battle hard against the Lightning and a four-minute penalty taken by Ferguson allowed them another chance to capitalise, with Sam Zajac scoring at the back post less than a minute into the power-play.

Despite seeing their lead dropped, the Lightning players never gave up and continued to press hard, with Rio Grinell-Parke eventually pulling things level again with a smooth, unassisted wrist shot.

Cale Tanaka scored from an unexpected angle, seeing his shot deflect into the net from Gospel's pads, with his regular linemates Russ Cowley and Tomas Kana providing the assists to see the Lightning enter the second intermission up 3-2.

Shortly after the break, Cowley and Tanaka combined again for an excellently worked goal, with the former Team GB international slotting home to give the home side a two-goal cushion.

This didn't stop the visitors from pushing back, however, and Meidl once again score a power-play goal roughly two minutes after Cowley's, thanks to Ferguson being given a two-plus-ten penalty for a check from behind.

The Chiefs tied things up less than three minutes later through James Archer and things looked pretty nervous for the Lightning.

Then Kana came up big with a strong snipe on the power-play, with Jamieson and Cowley having helped work the puck around the offensive zone.

From then on the Lightning took control, with Caly Robertson seeing his shot slip underneath Gospel's pads after a clean setup by Ferguson. There was a bit of a discussion around the goal as the refs appeared to blow the whistle as it crossed the line, leading from some of the Chiefs players to voice their disagreement.

With a two-goal lead restored, the Lightning truly came out guns blazing, which ultimately led to a brawl between both sides.

The Lightning drove forward into the Chiefs' zone, with Grinell-Parke using his speed to get into a position to tap home a pass from across the ice. The 20-year-old winger slipped as he attempted his shot and crashed into Gospel, who took exception to this incident.

The goalie began to beat the young winger, who lay helpless on the ice, prompting both sides and exert some aggression against each other, with Jamieson clearly taking exception to the response of the Leeds players, pulling down two players in the ensuing melee.

Gospel was ejected from the game, much to the delight of the home fans, while a handful of players on both sides sat for four minutes for fighting.

With the teams now in a four-on-three situation, the Lightning once again took control and saw Ari Narhi pick up a goal both Kana earned his second less than a minute later.

The final buzzer sounded and the crowd erupted as the Lightning's first victory was confirmed. In just one game, both teams improved on their performances a week ago, with Leeds scoring more in this game than in their previous two while the Lightning matched their score across their previous games.

An 8-4 result will undoubtedly please all involved with the team and should be the spark that truly kickstarts the Lightning's season. While no longer a part of the team, Radek Meidl received a truly warm reception from the home crowd, who recognise and appreciate his time last season.

The big Czech forward acknowledged the fans and even fist-bumped some of the younger contingent waiting at the Zamboni entrance, much like he did during his time in Milton Keynes. Chants of his name rang through the arena to show that once you've played for the Lightning, your efforts are never truly forgotten.

The Lightning have no game today (Sunday 29th September) so will take the opportunity to rest and recover ahead of yet another meeting with the Sheffield Steeldogs next Saturday (5th September) at Planet Ice MK Arena.