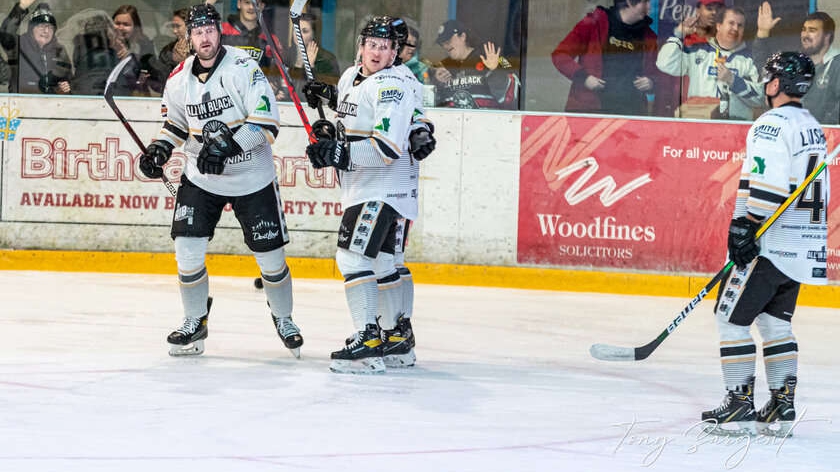 The Milton Keynes Lightning currently sit third in the NIHL National standings, having overcome adversity and a slow start to their season to prove to the league what they are truly capable of.

The 2021/22 hockey season was highly anticipated by fans across the United Kingdom, with the ongoing Coronavirus pandemic severely impacting play last season - limiting hockey to small series between handfuls of teams rather than a full regular season at any level.

For the Lightning, the Streaming Series a year ago was the only action the team would see together - meaning a number of popular faces from years prior, or even some of that season's new additions, would never be seen in the white, black and gold in person again.

With hockey returning in autumn, fans were jubilant and excited to see what head coach Lewis Clifford could put together after the team's impressive turnaround during the 2019/20 season - where they finished sixth in the league after a number of early struggles and roster changes.

At the time of writing, the Lightning are exceeding those performances by a long way and are third in the league - just a win or two behind league leaders the Swindon Wildcats and second placed Sheffield Steeldogs.

But these performances have come after the team suffered through some early difficulties, and even faced a big helping of adversity just a few short weeks ago.

The season began with the NIHL's Autumn Cup, where the Lightning picked up a 4-3 comeback victory in OT against the Raiders on the opening day of the new season before struggling to build any momentum throughout the eight-game series.

By the time it was over, the Lightning held a 3-5-0 record, placing them just one point above the Raiders, who occupied the basement position, with just six points.

The Autumn Cup saw the team play without star forward Liam Stewart for the first five games, due to a suspension he picked up while playing in New Zealand, and positive results were hard to come by.

The saving grace of playing cup games before the regular season began was that Clifford's side were able to build up their fitness and begin to jell as a team, with many new faces arriving in Milton Keynes this year, including forwards Sean Norris and Sam Talbot and even goaltender Matthew Smítal.

The regular season began in a positive way for the Lightning, who picked up consecutive close victories over the Raiders (3-1), Bees (3-2) and arch rival Peterborough Phantoms (5-4), shaking off early rust and picking up crucial points early on.

Then, the team were struck down with COVID protocols that saw them missing a high number of players. The most shocking element of the situation, was that the team were forced to fulfill their fixtures despite needing to call upon players from across the country in the NIHL 1 just to reach the game night roster requirements.

Heavy losses ensued for the team, who were unable to live up to their early regular season start and saw their position in the standings begin to slip, through no fault of their own.

Injuries also plagued the team, with club stalwarts James Griffin and Lewis Christie joining Samuel Russell as some of the players that have missed extensive periods of time this season, with the Lightning very rarely icing an entirely healthy roster.

Despite these difficulties, the team have returned with a vengeance and are now surging their way up the NIHL National standings with eyes clearing fixed on top spot, which no longer seems that far away.

Six consecutive victories have followed for the Lightning, including last Sunday's 8-3 demolishing of the Basingstoke Bison, and the team now hold a 9-4-0 record and have scored the joint-second most goals in the entire league with 53.

These strong performances have come courtesy of some outstanding individual efforts from the likes of top goal scorers Bobby Chamberlain (12G, 15A) and Sam Talbot (11G, 6A), all-around stars Liam Stewart (9G, 9A) and Adam Laishram (7G, 9A) and playmakers Russ Cowley (4G, 13A) and Leigh Jamieson (2G, 9A).

With the Lightning now back in the title chase, and with the team's health improving and consistency becoming established, there is plenty of optimism over the team's chances of earning silverware this season, something that last occurred back in 2017.