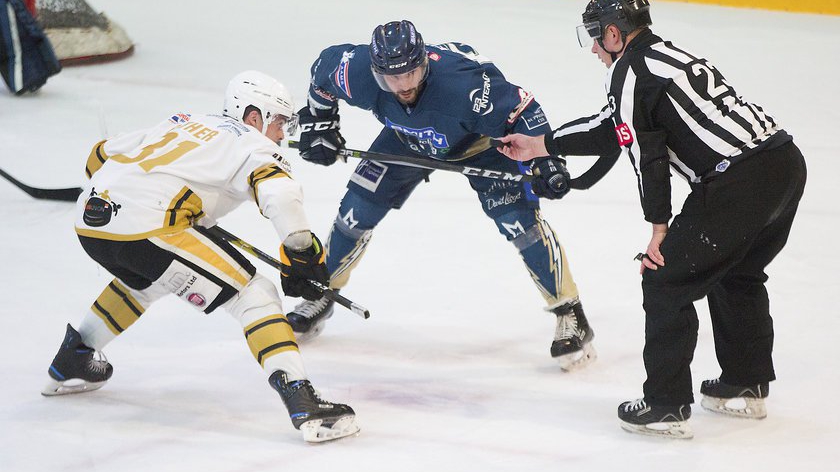 The Smith Recycling Milton Keynes Lightning battled hard but came up short in a very close home game against the Nottingham Panthers.

It took a late empty net goal to ensure the Lightning couldn’t bring things level, with the score sitting at 2-1 to the visitors for almost 40 minutes.

The game started in much the same way it played out, with both teams battling fairly evenly and getting a couple of chances in early.

But it was the home side that took the lead after just under four minutes of play when Radek Meidl tapped in Robbie Baillargeon’s across-ice pass.

That particular play has been used more often by the Lightning since the departure of Doug McKay, with the team benefitting from a more aggressive style of offence.

Just under two minutes after Meidl’s goal, the Lightning were gifted a power-play opportunity when Alexandre Bolduc found himself in the box for interference.

The Lightning were unable to replicate their recent strong power-play performances in this game, however, registering zero goals.

The Panthers began to take control of the game somewhat, with the home side holding on to their lead until just over nine minutes.

Alex Guptill’s clean wrist shot flew through traffic and beyond goaltender Patrick Killeen to tie things up at 1-1.

A fairly even number of chances followed before Clay Anderson was adjudged a 2+10 minute boarding penalty.

Lightning player and fans seemed to feel incensed by this decision when an identical hit against defenceman James Griffin received no punishment from the officials.

This lack of punishment came despite the Englishman laying on the ground holding his head for a few moments before getting up and reaching the bench to receive treatment.

The Panthers jumped at the power-play chance and Robert Farmer was able to tap in the puck to give the visitors a 2-1 lead that would go unanswered.

The second period saw no goals scored, with both teams keeping things close, but the Lightning were given a number of opportunities on the power-play.

With Eric Neiley leaving earlier in the week, it was noticed on the power-play but his absence did not keep the home side down.

The biggest opportunity for the Lightning in the second came when Robbie Baillargeon found himself on a breakaway, forcing Panther goalie Michael Garnett to charge out of his crease.

Baillargeon managed to get around him but wasn’t able to get a shot or a clean pass off before the Panthers defence managed to clear.

In the third, Killeen himself was called upon to stand tall against a Panthers breakaway – remaining firmly in his crease and stopping the puck to keep the home side in it at 2-1.

By game’s end, both teams had 37 total shots, with the Panthers picking up an empty net goal from Marek Tvrdon with just under two minutes left in the game securing the two points for the visitors.

The game ended with Martin Mazanec and former Toronto Maple Leafs first round pick Tyler Biggs dropping the gloves, much to the delight of the crowd, with the pair getting physical with each other throughout the game.

Despite the loss, the home side battled hard and kept things close for so long that one lucky bounce could’ve turned things around before the empty net goal.

Now the team travels to Wales to face the Cardiff Devils at Ice Arena Wales before a trip to Nottingham in mid-week.