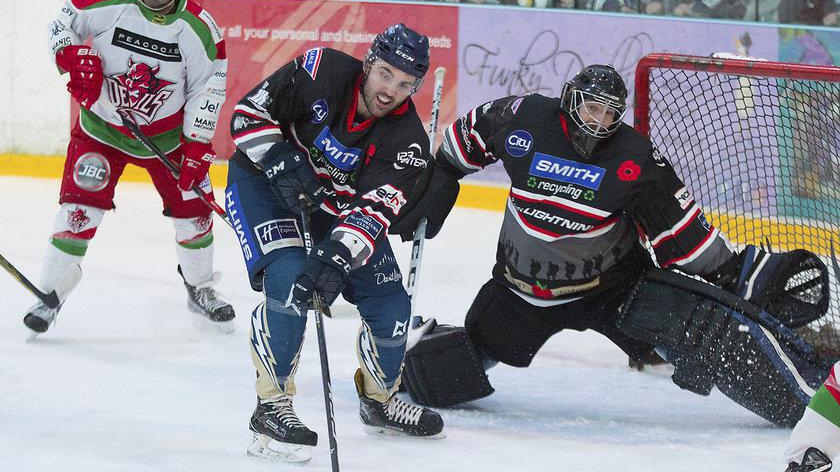 The Smith Recycling Milton Keynes Lightning’s losing streak increased to eight after a 4-2 loss to the Cardiff Devils at home last night.

The game saw the Lightning wear special Remembrance Day jerseys against the visiting Devils, with a minute’s silence being observed to remember those that gave their lives fighting for their country in the First World War – which ended exactly one year ago today.

After the pre-game commemorations, things got off to a hectic start for the home side.

The Devils forced goaltender Patrick Killeen into a scrambling save in under a minute, setting the tone for things to come.

After less than a minute-and-a-half, the Devils took the lead through Charles Linglet – his fifth league goal of the season.

Things looked to be against the Lightning early on, with James Griffin’s shoulder check being deemed interference by the officials – a decision that appeared soft in the eyes of the home crowd.

The Lightning managed to kill off the penalty and fought back, with Cole Shudra pulling the home side level with an excellent wrist shot just inside the Devils’ zone.

The goal was reviewed by the officials but was deemed a good goal, which also saw Harry Ferguson pick up his first point with the team – providing the assisting pass to Shudra.

The Lightning earned a power-play opportunity a few minutes later when the Devils were assessed a bench minor for having too many men on the ice.

Doug McKay’s side weren’t able to capitalise on the man advantage, but they did take the lead thanks to a Devils mistake.

Two Devils players crashed into each other in their own zone, allowing Andreas Valdix to make a pass to Tim Wallace.

Wallace was almost intercepted but fought to snatch the puck away before slotting it behind Ben Bowns to make it a 2-1 game heading into the second period.

The Devils dominated the game in the second period, however, earning an astonishing 30 shots on goal.

They pulled things back just under eight minutes into the second, with Layne Ulmer getting his sixth goal of the season before Sean Bentivoglio earning his fifth just over two minutes later.

The Lightning found themselves killing off a number of penalties in the process, with one penalty, in particular, prompting loud disagreement from the crowd.

Killeen made a sprawling pad save just under a minute after Bentivoglio’s go-ahead goal, with the Devils player unable to stop before tripping over his leg pad.

This, however, was deemed enough by the officials to penalise Killeen and give the Devils another man advantage.

Killeen’s noticeable anger at the decision prompted the officials to tack on another two minutes for unsportsmanlike conduct.

The Devils jump at the long power-play opportunity by securing a goal through defenceman Gleason Fournier.

The third period saw tensions grow between the two sides, but neither could add a further goal.

The Lightning pulled Killeen for an extra skater with just about three minutes left in the game, with the Devils also down to four men for a tripping penalty, but it wasn’t enough to help the home side score.

The game ended 4-2 to the visitors, with Killeen making an astonishing 52 saves and being named the Lightning’s man of the match.

McKay’s side will now turn their attention to their mid-week tilt against the Glasgow Clan – set to take place in front of the FreeSports TV cameras on Wednesday 14th November.