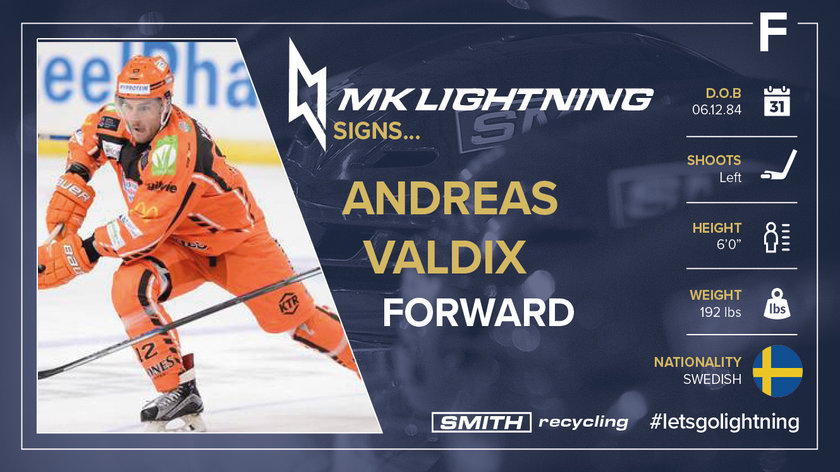 Ahead of their first pre-season game, the Milton Keynes Lightning have announced the signing of Swedish forward Andreas Valdix.

He brings to Milton Keynes a wealth of experience across a number of leagues, including 117 regular season appearances in the SHL, 376 in the Allsvenskan, 99 in the top tier of Austria.

Valdix was also selected by Washington Capitals in the fourth round of the 2003 NHL Draft.

In addition, he represented his country in international tournaments from U16 through to U20 levels.

Standing at 6-foot and 192lbs, Valdix is a versatile forward with a physical presence and can play centre or right wing.

He was a member of the Steelers side that scooped the Elite League Playoff title in the 2016/17 season.

An adept playmaker for the Yorkshire side, Andreas contributed more assists than any other import forward at the Steelers last season and the second highest of all imports combine.

Lightning Head Coach Doug McKay was delighted to be able to sign Andreas for the upcoming season.

He commented: “We faced competition for his signature so I’m extremely happy to have signed him.”

“He knows what the Elite League is about so will need no time to get up to speed there.”

“Andreas knows how to set up goals as well as score them and although this is a late acquisition for us, I’m happy that he’ll fit right in and be a valuable member of our team.”