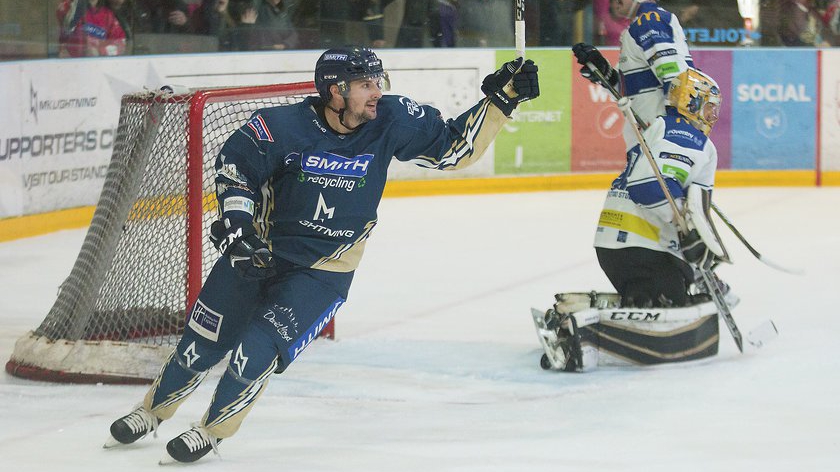 The Lightning, who have won back-to-back home games this week, climb off the bottom of the league and move above the Dundee Stars with the win after the Scottish club suffered a fifth consecutive loss.

Things began in similar fashion for the Lightning as they did against the Glasgow Clan on Wednesday, with the home side taking the lead just after the opening two minutes.

The Lightning found themselves on the power-play after Dominik Florian was sent to the box for a misconduct penalty after just under a minute-and-a-half.

Forty seconds later the Lightning were given a 5-on-3 opportunity when Ross Venus was sent to the box for slashing.

With the two-man advantage, Eric Neiley claimed the puck in the neutral zone, taking it to the net before sliding a perfect pass across the face of goal for Andreas Valdix to tap in.

The Lightning, continuing their free-flowing style of attack, extended their lead less than two minutes later through Robbie Baillargeon.

The goal came with the Lightning still holding a one-man advantage, with Venus still sitting for his slashing penalty.

Blaze goaltender Miika Wiikman had very little help with the second goal, with a huge scramble from both sides in front of the net leading to Baillargeon tapping the puck into the net.

A shaky few minutes from the lightning saw the Blaze pull within one when Luke Ferrara’s wrist shot beat Patrick Killeen after he received a pass across ice from Venus.

The one-goal difference didn’t last beyond the first period, when the home side picked up a third power-play goal of the night.

The Lightning, working the puck around the Blaze’s defensive zone, saw Martin Mazanec picked up a pass from Nelson Armstrong.

This allowed Mazanec a standing slap-shot opportunity that flew beyond Wiikman, giving the home side a 3-1 lead heading into the first break.

A fairly tame second period followed, with both teams taking penalties – coincidentally, all for slashing.

A few opportunities came from each side, with the Blaze starting to grow into the game and provide a few headaches for the Lightning.

The third period saw the Lightning take a number of penalties, gifting the visitors plenty of power-play opportunities.

However, the home side had a perfect penalty kill throughout the game and the Blaze were unable to break Patrick Killeen.

One opportunity saw Killeen forced into making an unbelievable glove save, with the Blaze player clean through on net.

But it was the Lightning that struck once again, with Baillargeon registering his second goal (and third point) of the night thanks to another perfectly placed pass from Neiley.

The Lightning ensured the game played out to a 4-1 victory and ended with the home side once again on the power-play when Kelin Ainsworth was sent to the box for a slash.

Speaking after the game, Ryan Lannon, who continued to act as interim bench coach for the Lightning, was pleased with the result.

He commented: “Yeah it was [a great win]. Two points at home on a Sunday, it’s everything we wanted.”

“I think we’re just kind of starting to believe in ourselves and to get some points is the main thing here.”

He added: “That was a good group effort tonight, sixty minutes we were pretty committed. [There were] a couple of breakdowns, they made some plays, which is going to happen.”

“The one goal that they got they just executed a really nice three-on-two but we just kept fighting, we didn’t get down.”

“I thought our third period [was] maybe not our best period. We gave some turnovers in the neutral zone that resulted in some chances."

“We took some penalties that we didn’t necessarily need to but, the penalty kill was huge.”

He concluded: “Patrick Killeen has been our back-stop since day one and did a great job for us so it was a nice win all together.”