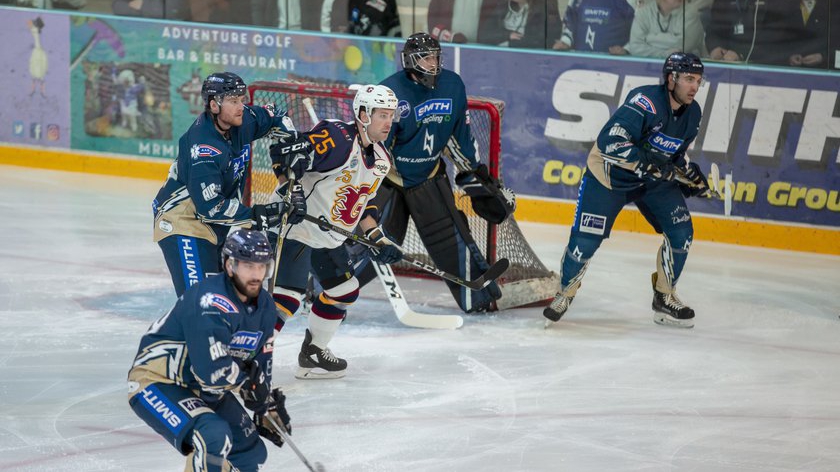 The Smith Recycling Milton Keynes Lightning suffered a heart-breaking end to their home game against the Guildford Flames, who claimed a 2-1 overtime victory.

The visiting Flames scored with 0.3 seconds showing on the scoreboard to secure two points while the home side might’ve felt aggrieved by some decisions made by the referees leading up to the goal.

The Lightning looked set to push their long-time rivals all the way to penalties before the Flames’ winner, but they could have secured the victory for themselves at multiple times throughout the night.

Doug McKay’s men opened the scoring in the first period, with Czech forward Radek Meidl slotting home a nice pass from Andreas Valdix across the face of goal.

The Lightning found themselves in a 5-on-3 situation at the end of the period, with home debutant Robbie Baillargeon and defenceman Martin Mazanec both being sent to the box for hooking and roughing respectively.

The Lightning successfully killed the penalty and went into the break, up 1-0.

Shots in the first period heavily favoured the Flames, with the Lightning only registering four while the visitors had 13.

Things continued to be difficult for the home team in the second period, with Baillargeon once again sent to the box for a delay of game penalty – with his attempted defensive zone clearance seeing the puck sent directly out of play.

It didn’t take long for the Flames to capitalise on this power-play opportunity, with the visitors tying things up just nine seconds later.

Things looked like they could’ve been worse for the Lightning when Tim Wallace hit the deck with a leg injury – forcing him to receive treatment on the bench after the officials stopped play.

However, the 34-year-old veteran returned to the ice in the third period – a big relief for a team that was already missing defencman Ryan Lannon and forwards Gorg Golovkovs, David Norris and James Hounsome in this game.

The third period was fairly open, with both teams getting a number of opportunities, but goaltender Patrick Killeen stood tall to keep the visitors at bay – sending the game into overtime.

Overtime saw the Lightning have the better opportunities early on, with a Clay Anderson shot almost sneaking past Chris Carrozzi.

Wallace also came close to securing the win for the home side, with the puck bouncing up in the air his tapped shot fell just wide of the opening in the net.

The American forward then found himself in the penalty box for holding, but the home crowd appeared to disagree heavily with this decision.

Wallace appeared to have been trying to get back up, after falling down with a Flames player in front of the Lightning’s net, and take his stick, which was under the body of a Flames player, rather than keeping his opponent down on the ice.

The penalty gave the Flames all the momentum and a scrappy play found Calle Ackered, who slotted home the winner.

McKay’s men will have an opportunity for revenge Sunday night when they travel to face the Flames in the last group game of this season’s Challenge Cup – with a win the only result that will see the Lightning qualify for the next round.

The spirited game saw the home fans introduced to Baillargeon and Harry Ferguson for the first time at Planet Ice MK Arena.

Speaking after the game, Ferguson, who joined the club from the Peterborough Phantoms ahead of their trip to Scotland spoke about the game.

He said: “I think it’s tough for the guys, we battled hard and I think everyone in the locker room wanted a win.”

“We had a tough weekend up in Scotland, I think we had a lot of positives that have come from the Scotland road trip but we just struggled to get the win.”

“Tonight it would’ve been nice to see the two points.”

When asked about the atmosphere and the fans, Ferguson commented: “It was really loud. I noticed when we first got out it was much louder than I expected.”

“It’s always a good thing, it helps the guys come out and give their all.”