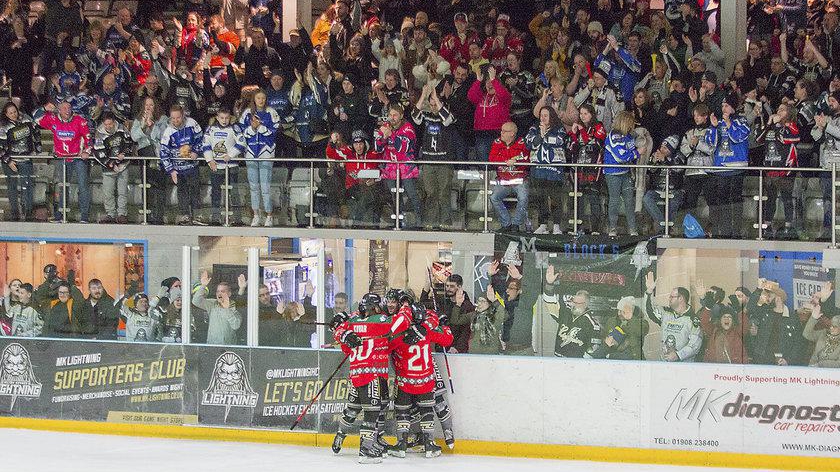 The Smith Recycling Milton Keynes Lightning claimed a consolation point after falling just short of upsetting the Peterborough Phantoms in front of a bumper crowd of 2245 last night.

Both sides relied heavily on offence in this game with a 7-6 OT victory for the visitors, while very few penalties were awarded despite a fiery and feisty atmosphere between the two rivals.

One such penalty came just under five minutes into the game, with Liam Stewart taking an unnecessary charging penalty for a hit along the boards in the Phantoms' zone.

12 seconds remained on the man-advantage when the Phantoms opened the scoring through a Bradley Bowering wrist shot beating goaltender Dean Skinns.

Stewart made up for his mistake though, with a truly impressive solo goal. An initial shot flew wide of Jordan Marr's net, only to bounce off the backboards perfectly for Stewart to flick a simple backhanded shot beyond the former Lightning goalie, his 20th goal since arriving in Milton Keynes.

Stewart's efforts to pull things level were wiped out just over six minutes later when a poor defensive zone giveaway allowed Ales Padalek to register his first of two goals of the evening, sending the visitors into the first intermission with a 2-1 lead.

The Lightning tied things up around seven and a half minutes into the second period when Leigh Jamieson's shot from the point caught everyone off guard, sailed through the crowd and was tipped slightly by team captain Russ Cowley to bring the score to 2-2.

Some physicality and disagreements between Lightning and Phantoms players occurred in the second, with Rio Grinell-Parke taking a clear cross-checking penalty after he retaliated against a Phantoms player just before the half-way mark, only to see William Weldon retaliate against RGP, throwing his stick away in anger, receiving his own unsportsmanlike conduct penalty three minutes later.

Sandwiched between the two penalties came another Phantoms goal, just as Grinell-Parke's penalty had expired. The Phantoms jumped out to a two-goal lead just before the end of the period, with the officials appearing to miss a trip against Cale Tanaka in the neutral zone.

This didn't stop the Lightning from fighting back in the third, however, with just over a minute needed for Tanaka to earn his 10th goal of the season thanks to Robert Ferrara being sent to the box to start the period, gifting the home side a power-play.

Three minutes later and the score was tied at 4-4, with Jamieson this time being credited for a clean wrist shot. This didn't last long, however, as the Phantoms once again pulled ahead just a minute later.

The game was largely end-to-end, though the Lightning certainly had the majority of chances, with the final shots tally registering at 43 for the Lightning and just 26 for the Phantoms.

Jamieson once again pulled the home side level, thanks to a simple across-ice pass from Liam Stewart finding the Lightning legend open at the back post.

James Ferrara looked to have sealed his team's victory when he scored their sixth with less than four minutes to go in regulation, but a storming James Griffin wasn't to be denied and sent both sides into overtime.

The Lightning had the majority of the possession and pressure in the additional period, going close on a number of shots but ultimately it wasn't enough to continue their recent unbeaten run, with Callum Bugless, who played in last year's pre-season for the then-Elite League Lightning, beat Skinns at the near post with less than 20 seconds left on the clock.

The OT point claimed by the Lightning will be seen only as a consolation, with the team deserving the full points after sustaining so much pressure on their bitter rivals. But a point is a point and it keeps the Lightning four points behind the Sheffield Steeldogs and two above the London Raiders, who have played a game more than the Lightning.