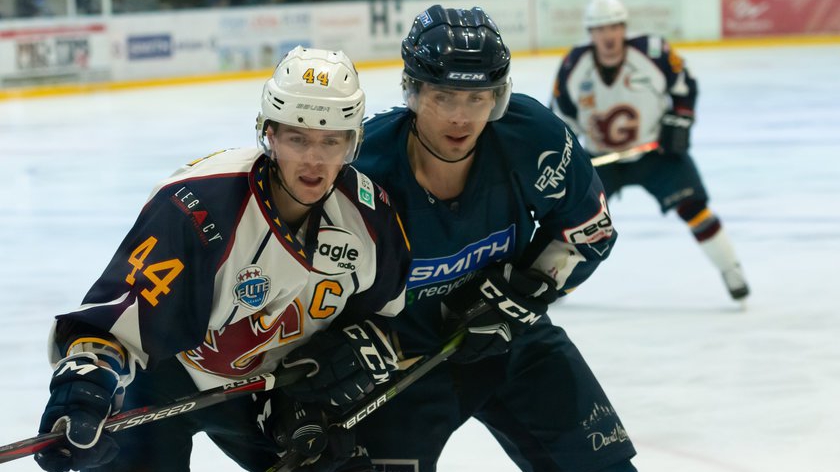 ​​​​​​​The Smith Recycling Milton Keynes Lightning earned a 4-3 victory over the Guilford Flames, ensuring the visitors did not sweep them across the entire season.

Prior to Friday night’s game, the Flames had defeated their long-time rivals from the EPIHL in every game they played – outscoring them 30-11.

But it was the Lightning, who battled intensely throughout the night, who secured the two points despite everything seemingly going against them.

The Flames out-shot the home side by a whopping 47 to 19, with goaltender Patrick Killeen effectively standing on his head all night, and the Flames managed to keep five players on the ice at all times throughout the game.

The Lightning suffered eight penalties throughout the game, while the Flames managed to remain disciplined and take no penalties – with the final minute of the game seeing the visitors pull their goaltender to give them a brief 6-on-3 situation.

The home side, however, had a stellar showing on the penalty kill – with the Flames’ advantage coming up empty every time.

It was the Lightning who opened the scoring, with Michael Fine going to the net and cashing in on a Tim Wallace feed for his tenth goal of the season.

The early lead lasted less than a minute, with the Flames pulling level through Evan Janssen.

This was the last time that the score was level, with the Lightning keeping ahead of their long-time rivals throughout the rest of the game.

Wallace, who has been ever-present for the team in all aspects of the game this season, earned his 19th goal of the season, with Robbie Baillargeon picking up his first of two assists in the game.

The puck squeaked over the line on Wallace’s goal and require a video review to ensure it did indeed completely cross the threshold.

A Baillargeon takeaway in the neutral zone less than a minute later saw Georgs Golovkovs bear down on the Flames’ goal before slotting a clean pass across ice for Andreas Valdix to net his tenth goal of the season – extending the Lightning’s lead to 3-1.

The Lightning continued to battle throughout the period, but the Flames pulled within one with just over two minutes left in the second through Ian Watters.

The third period saw the Lightning take the majority of their penalties, but the home side extended their lead again through a clean Nelson Armstrong wrist shot through traffic.

Three minutes later, Jamie Crooks brought the Flames back within one and the tense final minutes of the game saw the home crowd truly push the Lightning players on.

A bench penalty for too many men on the ice and a David Norris hooking penalty saw the Flames pull their goaltender, giving them a six-on-three opportunity.

With the crowd growing louder with every passing second, the Lightning keep their 100% penalty killing record in the game and were rewarded with the loudest and longest celebration of the entire season.

The fans remained standing for a solid five minutes after the final buzzer, chanting ‘Lets Go Lightning’, making it difficult for the player presentations to take place – with so much energy and emotion filling the room after a difficult few weeks for the team.

The victory ensured the Flames couldn’t claim to have swept the Lightning throughout the season, with the old EPIHL rivals being the only team in the league to have kept the Lightning at bay all year.

It is the last time the two teams will play each other for the foreseeable future and the result will no doubt live long in the memory of the Lightning fans for a long time.