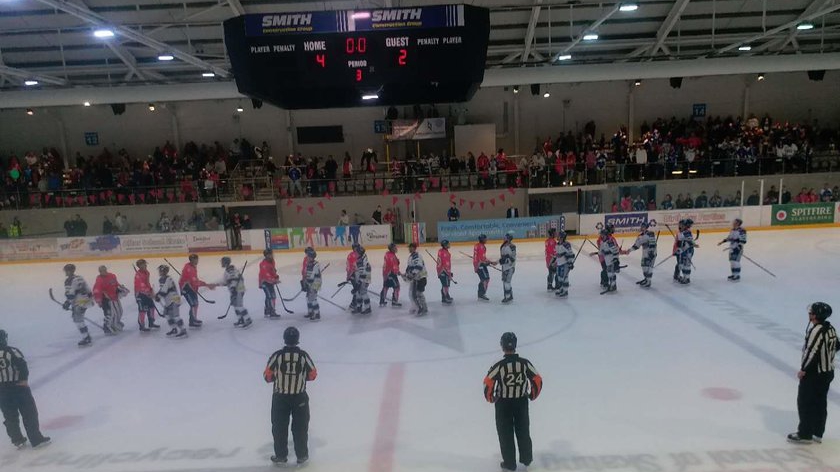 The Smith Recycling Milton Keynes Lightning earned their first competitive win at home this season with a 4-2 score against the Coventry Blaze in the Challenge Cup.

The hard-fought victory came despite the Lightning, who were sporting their pink cup jerseys, still without Martin Mazanec (suspension), Nelson Armstrong (visa) and Owen Griffiths (injured).

The team was also without the additional help of Rio Grinell-Parke, who was on duty with the Milton Keynes Thunder.

The game got off to a quick start with former Lightning goaltender Mika Wiikman forced into making a quick glove save after just a few seconds.

The first penalties of the game were called after just over one minute with both Trevor Morbeck and the Blaze’s Ben Lake both taking matching hooking penalties, sending both teams into a 4-on-4.

The team’s returned to full strength and 35 seconds later the home team took the lead through Eric Neiley.

The goal came after a big scrap in front of the net, in which Wiikman lay on the ice in an attempt to stop the puck before Neiley was able to tap it in.

About three minutes later and the Lightning were on the penalty kill, with David Norris sent to the box for a hooking minor.

The Blaze jumped at the man advantage, with Kevin Morris netting a deflected Nicolai Bryhnisveen shot with just 17 seconds left on the powerplay.

The game was end-to-end for most of the period, but it was the Blaze that netted next, with Lake scoring with just over one minute left.

The second period was wide open, with neither team making many mistakes, but the Lightning managed to pull level from a strong Michael Fine shot.

15 seconds passed before the Lightning were back on the penalty kill, with Cole Shudra sent to the box for slashing, but this time the team held strong.

James Griffin was sent to the box five minutes later for a tripping penalty, giving the Blaze the man advantage once again.

However, before the teams could clock even one second after Griffin’s penalty, Blaze forward Kelin Ainsworth was sent to the penalty box for a delay of game, something which Ainsworth was visibly angry with.

Ainsworth sprang into action after returning to the ice, having a chance that forced Killeen to make yet another solid save.

But it was the Lightning that retook the lead thanks to a David Norris goal that saw the puck bounce over Wiikman’s shoulder with less than five minutes left in the second period.

The third period started with the Lightning shorthanded once again, with Andreas Valdix sent to the box for tripping – a penalty called as the buzzer sounded at the end of the second.

The teams shared penalties throughout the third and with one minute and 38 seconds left in the game, Wiikman was called to the bench to give the Blaze a two-man advantage thanks to Tim Wallace finding himself in the box for slashing one minute earlier.

The extra man did not help the Blaze as Wallace returned to the ice and helped set up Michael Fine’s empty-net goal with ten seconds left on the clock, sealing the win for the home team.

Speaking after the game, Wallace commented: “I thought we played okay, I think we had a few lapses mentally. I thought we could’ve been a little smarter in certain parts of the game.”

“Overall, we worked hard, we don’t have a lot of guys right now with a couple injuries and a couple suspensions but, with the numbers we had, we battled for a good win.”

“We got it done, found a way to win. We’ll enjoy this tonight but we’ve got a big one tomorrow.”