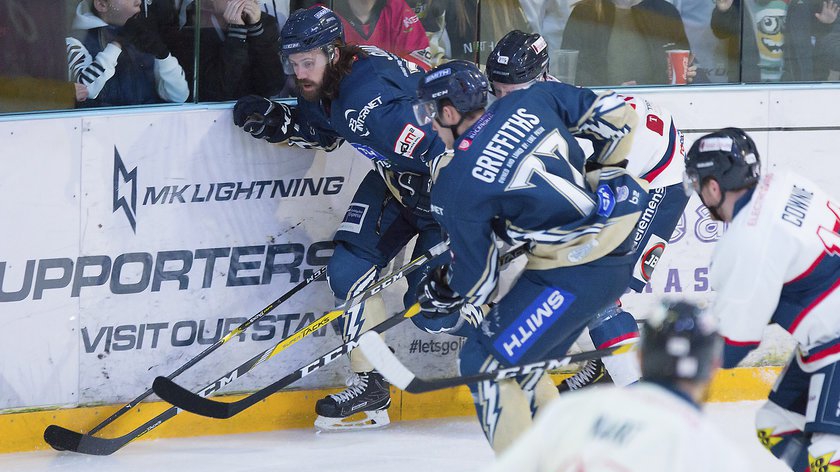 Heading into the game, the Stars were looking to regain winning momentum after defeating the Nottingham Panthers on Friday in OT – having dropped two consecutive games to the Belfast Giants and the Sheffield Steelers.

For the Lightning, they were looking to extend their recent home winning streak to three games for the first time this season.

Things got off to a shaky start for both teams, with players losing their footing and missing passes before the Lightning had the best chance of the first period.

Player-coach Tim Wallace sent a wrist shot towards goal, only to see the puck bounce off the post – the first real test of the Stars’ defence in the game.

Dundee equally had an excellent opportunity to try and pull clear, with the Stars picking up the puck after a Lightning player slipped on the ice.

Going one-on-one with goaltender Patrick Killeen, the Stars weren’t able to convert as the big Canadian held firm and took the puck into his chest.

The teams found themselves at 4-on-4 for a couple of spells in the first, but the period ended with the Lightning having 20 seconds left of a power-play when defenceman Connor Cox was sent to the box for interference.

Just 18 seconds after the Stars killed off that penalty to open the second period, Matt Marquardt found himself in the skip for hooking – sending the Lightning back onto the power-play swiftly.

It was then that Robbie Baillargeon opened the scoring with his eleventh goal of the season, sending a nice wrist shot beyond Pontus Sjogren.

Things continued to play out end-to-end for the majority of the period, though the Stars out-shot the home side 45-25 by the end of the game.

It looked, however, as if the Lightning had extended their lead to 2-0 with four minutes left in the period – but the goal was ruled out due to a high stick, much to the disappointment of the home crowd.

After that, the Stars began to dominate and a slight miscommunication saw the visitors have a 3-on-1 opportunity in the offensive zone – once again being denied by Killeen.

The third period saw the Stars have a number of power-play opportunities, with Ivan Sijan sent to the box for high sticking early on, Michael Fine sent down twice for slashing and hoking as well as the familiar Martin Mazanec roughing penalty that appears to come up at least once each week.

But the worst-ranked power-play unit in the Elite League were unable to break through the Lightning penalty kill – going 0 for 8 throughout the game.

The score were uncomfortably close for the home side when it looked as if the visitors had pulled things level with five minutes remaining.

A scuffle around the goal mouth saw the puck come loose, picked up by former Lightning player Jordan Cownie, whose pass helped see the puck sent back into the net, only for the video review to cancel out the effort for what appeared to be goaltender interference.

Just under three minutes later and the game was effectively done when the Lightning, shorthanded due to Mazanec’s roughing penalty, extended their lead thanks to a Wallace short-handed goal.

Wallace, using his refined stick handling skills, dummied Sjogren, who expected a pass to the open Baillargeon on the other side of the ice, only for Wallace to wrist home a perfectly placed shot – seeing the home crowd erupt.

With this goal, the Lightning found themselves on a power-play themselves when Matt Bissonnette was sent to the box for Sjogren’s actions towards the officials.

The Stars, now two goals down with just over two minutes left, decided to pull Sjogren to keep things even on the ice – but it allowed the Lightning to claim a third goal and secure a strong victory in front of the home fans.

Nelson Armstrong collected the puck in his defensive zone and sent a perfect pass across the ice to Georgs Golovkovs, who was clean through on the empty net – sending the crowd into an uproar even before the puck hit the back of the net.

The win saw Killeen awarded the Man of the Match award for securing the Lightning’s first-ever home shutout in the Elite League – a fully deserved accomplishment for one of the team’s standout players this season.

The Lightning have now won three out of their last four games, winning three home games in a row to see them hit the 20-point mark in the league, just three points behind the Manchester Storm.

Speaking after the game, player-coach and goal-scorer Wallace was pleased with the team’s performance on home ice.

He commented: “We’ve been playing good at home. I think that’s [three] in a row. It’s something that’s important if we want to climb back in the standings.”

“We want to come out hard and be aggressive, especially at home, and give the crowd something to cheer for so we’re pretty happy with the result tonight.”