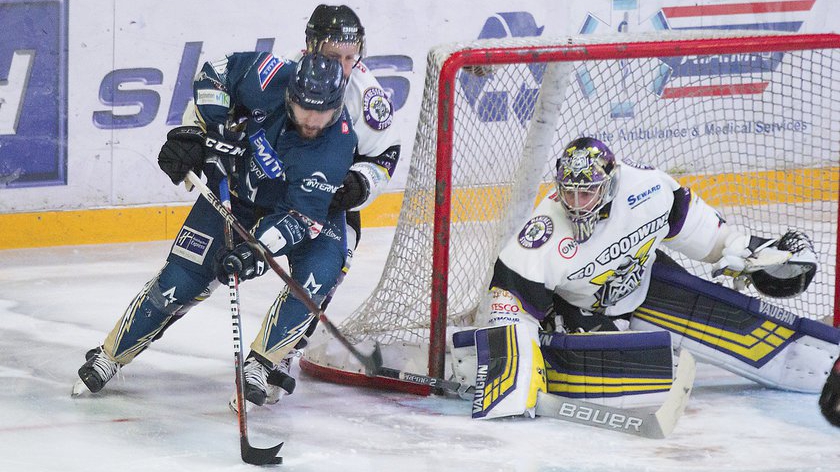 A disciplined performance helped the Smith Recycling Milton Keynes Lightning to a 4-3 victory over the Manchester Storm last night.

The Lightning (13-32-4) reached the 30-point mark for the season with the victory and managed to only give up one penalty in the entire game against the Storm (21-24-5).

The first period saw both teams kept to just a few shooting chances, with the Lightning and Storm registering just five apiece in the opening 20 minutes.

It was the home side that took the lead, however. With the Storm’s Chance Braid sent to the penalty box for hooking, the Lightning capitalised on the power-play opportunity.

The Lightning continued to battle hard in the second, registering 15 shots to the Storm’s 12 by the end of the middle period.

After just under five minutes into the second, the Lightning extended their lead to 2-0.

Andreas Valdix picked up the puck in the neutral zone and charged towards the net before slotting a pass over to Georgs Golovkovs, who sent the puck beyond Ginn and gave the Lightning a two-goal lead.

The home side’s lead was halved just over four minutes later, however, with a poor line change leaving Nelson Armstrong as the only player chasing down three charging Storm players on a breakaway.

Adam Barnes slotted a Dane Byers pass beyond goaltender Patrick Killeen, who could do nothing with no skaters helping him out – with Armstrong just not quite fast enough to catch the Storm players.

The two teams shared possession throughout the second, but it was the Lightning that maintained their lead heading into the final period.

The third started to see some of the Storm’s physicality go against them, with Harrison Ruopp sent to the box for a cross check just two minutes into the period.

Roughly one minute after the power-play opportunity ended, the Lightning extended their lead thanks to exceptional Armstrong snap shot from the point – with Robbie Baillargeon providing the primary assist.

That lead didn’t last long, with the Storm pulling within one again just 56 seconds later through Braid.

There were some arguments between Baillargeon and a Storm player at the other end of the ice that continued for a few moments after the visitors celebrated their goal.

The Storm saw themselves killing another penalty when Rob Linsmayer was sent to the box for hooking, but it was in the final few minutes that saw things get heated between the two teams.

Declan Balmer threw a big hit against Harry Ferguson into the boards, causing the crowd to shout and jeer before the officials sent the Storm player to the changing room – handing him a two-plus-ten penalty that ended his night.

The two teams began to throw everything at each other, but it was David Norris that managed to squeak in the power-play goal that would secure the Lightning the victory.

Things got a little nervy for the home side when the Storm pulled within one again, with just 39 seconds left in the game.

The Lightning held on, however, and secured the two points in front of a raucous home crowd.

After Lightning victories, the team names a ‘warrior’ of the game for their efforts on the ice, with that honour going to Michael Fine – who opened the scoring for the team.

Speaking after the game, Fine commented on the victory, saying: “It was good to get a win in front of all the fans that have been here all year, so it was good to do that at home.”

“Had to make it exciting, [but] we were pretty confident we were going to be able to hold them off that last forty seconds after their third goal and we were able to do it.”

Fine opened the scoring with a neatly tapped-in power-play goal, taking his total up to ten in all competitions for the Lightning this season.

Speaking of his goal, he said: “It’s always good to get one early, get the confidence going. It was a great play by Georgs and Maz going to the net.”

He concluded: “It was right place, right time and it felt good.”