Four in, four out for MK Lightning ahead of upcoming Streaming Series 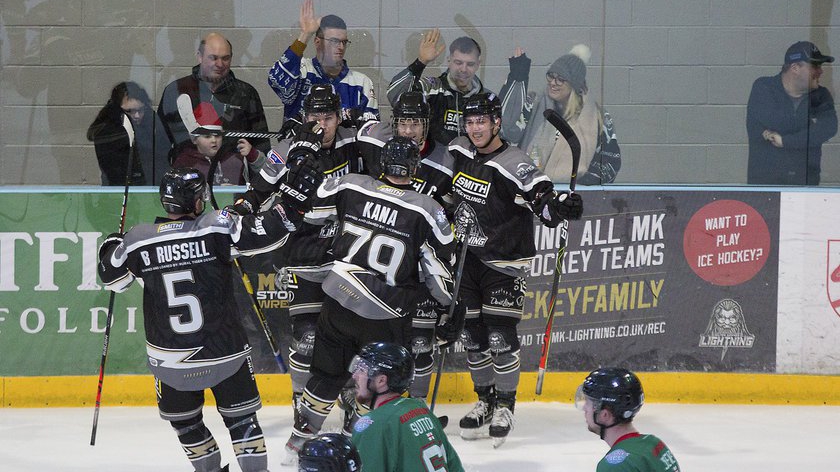 The All In Black Milton Keynes Lightning have made a number of changes to their roster for the upcoming Streaming Series, which is set to begin next week.

Earlier this week, the Lightning revealed that four players currently signed for the 2020/21 NIHL National season had opted not to feature in the information-gathering series this month.

Grant McPherson, James Griffin, Leigh Jamieson and Lewis Christie will not feature for the Milton Keynes club when they take on the Swindon Wildcats and Sheffield Steeldogs.

With these four players unavailable, the Lightning have moved quickly to bring in some exceptional replacements - including a couple of very familiar faces for Lightning fans.

The first two players to be announced were defenceman Ben Russell, who has played a number of times for the Lightning, including 41 games during the COVID-shortened 2019/20 season.

With Ed Knaggs already signed up for this season, where he will be wearing the #5 jersey, the older of the two Russell brothers will sport the #55 instead during the series.

Along with Russell is Coventry Blaze forward Ross Venus, who has been a strong performer in the Elite League over the past few seasons.

Last season alone, the second while wearing the alternate captain's 'A', Venus scored 15 goals and registered 37 total points in 47 regular-season games for the Blaze.

He has racked up 496 EIHL regular-season games to date, with 166 total points (57G, 109A) and will provide the Lightning with plenty of offence at the left wing position.

Speaking at the time of the announcement, Lightning head coach Lewis Clifford commented: "It’s great that Benny and Ross have agreed to join us for the upcoming games. Benny has been skating with us since we were able to return to the ice, and a few spots opened up so it suited both us and him to get him straight back in the fold."

"Ross is a great player who can play in all situations, he comes highly recommended but some of our players and having seen him skate last night I’m sure he will fit straight into our roster and be a welcome addition."

"Whilst our roster will look a little different to how we expected, we will be ready to go next Saturday and hopefully able to put on a great show for all the people who are watching us on the stream."

With two more spots to fill, the Lightning today announced the return of defenceman David Clements and forward Lewis Hook to Milton Keynes.

Clements, 26, first featured for the Lightning in the 2015/16 EPIHL season, which he split with his regular club the Coventry Blaze - with whom he has earned 245 regular-season appearances in the top tier of British hockey.

The return of Hook will be a welcome sight for the team's fans, with the former Lightning favourite spending the past two years playing for the Elite League's Belfast Giants.

His two years in Belfast have seen Hook feature 109 times, scoring nine goals and earning 37 total points. His experience in the EIHL will be excellent for the Lightning in this three-team series and will make for some truly exciting games when everything begins next weekend.

With Liam Stewart donning the #11 jersey this season, Hook will revert to the #8, the same number he wears for the Giants. Venus will wear #59 and Clements will wear #58.

Speaking of the final two signings for the team, Clifford commented: "I’m really happy to have Hooky and Clemo joining us to help fill some gaps for the Streaming Series series, I know and have worked with both guys before and I’m certain they will fit in with us on and off the ice for the next few weeks."

"Hooky has been skating with us since we resumed training a while back and knows everyone here well and Clemo knows a large quantity of the boys from playing here previously and his Coventry and GB connections so there shouldn’t be any teething problems."