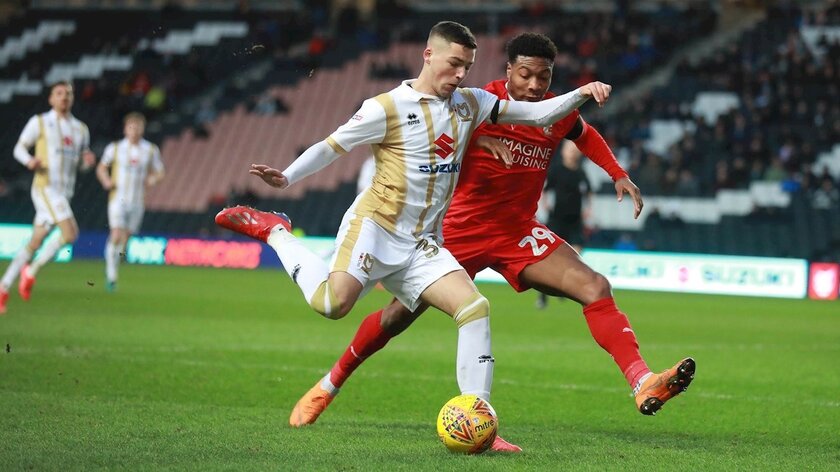 Stephen Walker and Andrew Fisher have returned to Stadium MK after Milton Keynes Dons made a couple of late deadline day signings.

Walker, 20, played for the Dons under Paul Tisdale during the team's third placed League Two season, making seven appearances while on loan from parent club Middlesbrough.

He spent a brief spell at Crewe Alexandra on loan last season, scoring a goal in six appearances again in League Two.

Now, he makes a return to Stadium MK on loan once again and will have the opportunity to test himself in League One, with the Dons allowing Sam Nombe to leave on loan to Luton Town shortly before Walker's return was announced.

Speaking to the club's official website, Walker commented: "I’m delighted to be back, I enjoyed my time here two seasons ago and I’m looking forward to getting going again."

"The manager was a big reason why I wanted to come back here. I obviously know him from our time together as teammates and I’m excited to get to work under him and his management team."

He added: "I want to come here and contribute as much as I can to help the team win games and climb the table."

The England Under-19s international wasn't the only signing on deadline day for the Dons, however, with the club bringing back another familiar face in goalkeeper Andrew Fisher.

Fisher joined the Dons on loan from Blackburn Rovers this past January, supplanting then-backup Stuart Moore before the curtailment of the season, moving back down to Stadium MK on a permanent deal.

The 22-year-old will provide competition for the team's backup position behind incumbent starter Lee Nicholls, with Laurie Walker having held the role admirably so far this season.

Speaking to the Dons' website, goalkeeping coach Dean Thornton commented: "We’re delighted to bring Andrew back to the Club. He was a massive part in us doing well in second half of last season so we’re pleased to have him here on a permanent basis."

"We believe he’s one of the best goalkeepers in the country at his age. He has his whole future ahead of him and with our style, he suits down to the ground."

He added: "He will be a big addition to the goalkeeping department, as well to Russ’ team."