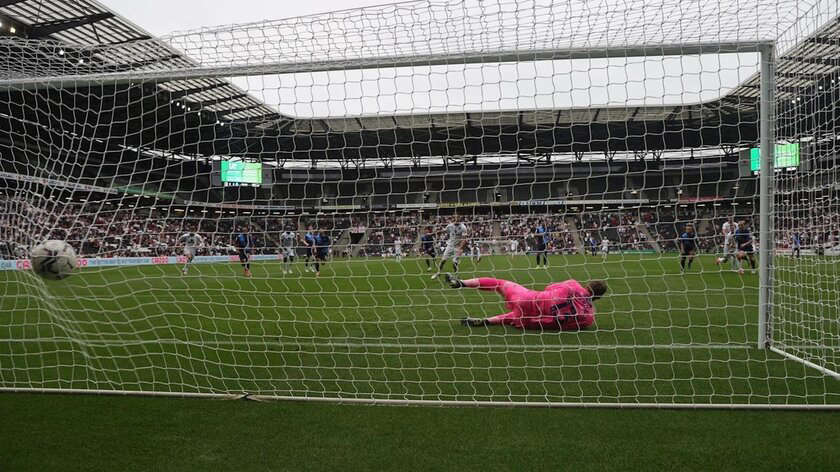 In a Buckinghamshire Derby that pitted third against fifth at the start of the match, it was the Dons that came out on top after Troy Parrott scored from the spot in the first half - enough for the Milton Keynes club to see out victory over ten-man Wycombe.

The match started with the visitors firmly on the front foot, getting crosses into the box early and forcing Andrew Fisher into making a strong save after just three minutes of play - with Harry Darling on hand to prevent disaster after an ensuing scramble around the six-yard box.

The Dons were able to give Troy Parrott and opportunity early in the match, with Tennai Watson sending a low cross deep into Wycombe's box, seeing the Republic of Ireland striker get a head to it, but narrowly sending the ball wide.

Liam Manning's side pressed forward again minutes later, seeing Ethan Robson charge towards Wycombe's box before picking out Hiram Boateng to his right. Boateng then cut inside and got a shot away on the edge of the box, but the Chairboys' defence held firm and blocked his effort.

The visitors threatened to open the scoring around the ten-minute mark, when Daryl Horgan cut inside and lofted a shot with his left foot, sending Fisher outstretched and unable to do anything except to watch as the ball fortunately clipped the corner of the crossbar and go out for a goal kick.

After the near-miss, the Dons began to assert themselves on the match, winning free kicks around Wycombe's box and pressing forward with more confidence - but unable to get a meaningful shot on goal with the visitors keeping a tight back line.

The visitors thought they had opened the scoring in the 35th minute of play, with a free kick whipped in finding an open head that sent the ball into the back of the net, only for the linesman to raise his flag for an offside - much to the relief of the home side.

The Dons were gifted the perfect opportunity to take the lead after Parrott was taken down inside the Wycombe box after receiving a well-placed ball over the top.

Anthony Stewart took the striker down, with the referee instantly pointing to the spot and brandishing a red card, forcing the visitors to play the rest of the match with at least a player down.

Parrott was always going to be the man to take it, and he netted coolly while sending Stockdale in the opposite direction, picking up his third goal of the season.

Four minutes were added on to regulation time in the first half, thanks to the penalty and Harry Darling requiring medical attention for a lengthy period earlier in the half, but the Dons held onto their lead and entered the break 1-0 up.

With the man advantage, the Dons started the brighter of the two sides in the second half, with Ethan Robson letting fly a low strike that forced Stockdale into making a two-handed diving save to keep the home side from extending their lead.

The visitors earned a succession of corners, hemming the Dons in their area and on the back foot until Matt O'Riley was able to finally clear the ball away before drawing a free kick as the home side began to break.

Max Watters, brought on as a substitute in the 64th minute, almost made an immediate impact with his first touches of the ball, racing onto a through ball and turning onto his right foot in the centre of the penalty area, only to see his shot attempt interrupted and the ball roll away from danger.

The Dons continued to control the pace of the match, keeping the visitors largely in their own half save for a few counter-attacks, with Parrott getting a head in at the near post from a corner.

Twine threatened deep into the second half with a low, curling shot from the edge of the box, seeing Stockdale palm the effort away and to his defenders before Watters, moments later, had a chance to turn in the box - only able to get a tame effort away that rolled into Stockdale's hands.

Parrott then had a chance inside the penalty box late on, seeing his effort blocked and sent out for a corner with Watters narrowly missing the ball at the far post.

The visitors caused the Dons a few nervy moments late in the match, with Jack Grimmer sending a clean 30-yard strike forward after a scramble inside the box, with the home side relieved to see the ball sail over the bar.

Wycombe continued to build pressure, with a scramble around the box after another corner sent in, the Dons narrowly clearing the danger and keeping Gareth Ainsworth's side at bay, with the style of play turning more physical as the dying minutes of the match passed by.

Despite a late free kick seeing even Stockdale rush forward, the Dons avoided disaster and held onto their narrow lead and claim all three points - extending their unbeaten run to seven league matches, with four consecutive victories at home.

The Dons will now take on Fleetwood Town at home on Tuesday night, looking to extend their run and keep themselves amongst the promotion places.