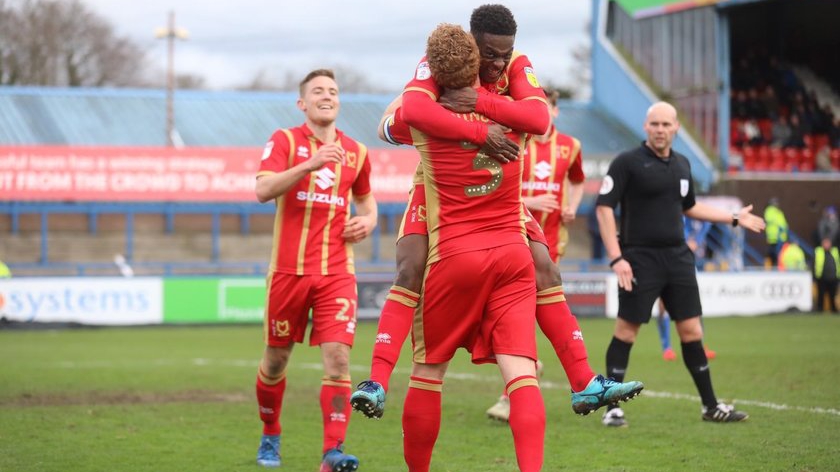 Milton Keynes Dons have extended their recent winning streak to five games after a 3-1 score over league strugglers Macclesfield Town.

As a result of the Dons' away victory, and Mansfield Town's 2-1 loss to Port Vale, Paul Tisdale's side return to the automatic promotion spots.

Heading into the game, Tisdale made just one change to the side that earned a 1-0 home victory over Crawley Town last Saturday, seeing David Wheeler take Jake Hesketh's place in the starting XI with Macclesfield boss Sol Campbell making an astonishing nine changes to his side.

Despite the huge overhaul of his starting line-up, it was Macclesfield that struck first when Nathan Cameron latched on to a loose ball that hadn't been cleared from a free kick.

The Silkmen held onto their one-goal lead for 25 minutes before the visitors drew things level thanks to Wheeler, who was fresh after scoring a hat trick for the Dons' Under-23s earlier in the week.

McGrandles played a left-sided corner in quickly, seeing Wheeler dart through the box and beat two opposing players through the air to score his first goal for the club.

After drawing things level, the Dons began to take over the game - forcing a number of saves from goalkeeper Kieran O'Hara.

Callum Brittain scored the go-ahead goal for the Dons in the 53rd minute, seeing his shot from the edge of the box driven low into the back of the net.

Kieran Agard scored a looping header 11 minutes before the end of the game to secure the Milton Keynes club all three points - sending them third in the league after leapfrogging Mansfield.

The Dons had 11 of their 19 shots on target by the end of the game and thoroughly made up for what was a disappointing first half, ensuring their winning run continues.

Tisdale's side now travel to Morecambe on Tuesday (12th March) hoping to make it six wins in six before returning to Stadium MK next Saturday (16th March) when Stevenage are the visitors.