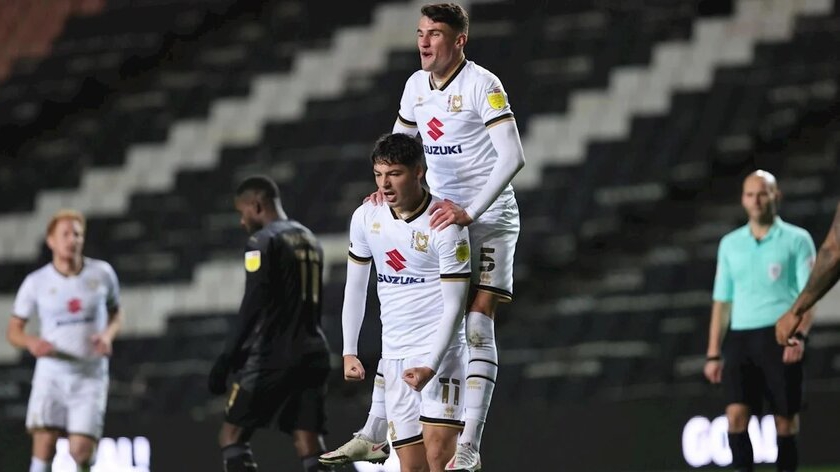 Milton Keynes Dons secured an impressive 2-0 victory over Wigan Athletic, the first in the club's history against the Latics.

Goals from Scott Fraser and Stephen Walker saw the Dons secure the points on a cold October evening at Stadium MK, with the visiting Wigan Athletic never looking truly threatening during the 90 minutes.

The opening five minutes of the match were fairly lively, seeing both teams battle for possession, with the home side working the ball around the middle of the pitch well.

The visitors were forced into an early change, though, with Will Keane being replaced by Ollie Crankshaw, who moments later had an effort at goal but saw his shot collected by goalkeeper Andrew Fisher with ease.

Scott Fraser looked set to have the best of the Dons' early chances as he worked his way past the Wigan defenders before one of the visitors managed to kick the bacl out of the penalty area.

Cameron Jerome then looked threatening minutes later as he chased down a long ball into the penalty area, seeing his effort to bring the ball back across the face of goal met by the Latics' goalkeeper Jamie Jones.

Jerome had another effort in front of goal moments later, but saw his shot well saved by Jones.

The Dons, growing in confidence, began to press the visitors more aggressively, forcing them into making rushed decisions that led to an offside free kick being awarded.

The free kick led to a nice passage of play that saw the Dons whip the ball into the Wigan box, but unfortunately no white shirts could meet the ball and keep the play alive.

The Dons had another threatening effort that originated in their own area. Matthew Sorinola tracked back with pace and stole the ball from Massey with a perfectly timed tackle, leading to the Dons heading in the opposite direction and getting a close-range effort off from Fraser.

Jones stood tall once again when Fraser had another close-range effort saved and pushed just wide of the post.

Russell Martin's men continued to pile on the pressure on the visitors, but couldn't break the deadlock, with the two sides heading into the halfway point tied at 0-0.

The Dons brought their positive momentum into the start of the second half, with Sorinola getting a cross whipped into the box but narrowly missing the lurking Jerome on the edge of the six-yard area.

Moments later and the Dons were awarded a penalty after Sorinola, running through the box, was brought down.

Scott Fraser didn't waste the opportunity to send the home team 1-0 up from the spot, sending Jones to his left with a well-placed shot flying past his right side.

Fraser threatened again shortly after, receiving a low cross from Regan Poole on the edge of the area, but his first touch saw the ball roll safely into the arms of Jones.

Wigan couldn't handle the sustained pressure and the Dons extended their lead to 2-0 in the 52nd minute thanks to Stephen Walker's strong, low-driven shot from inside the box.

Walker, full of confidence, attempted to go it alone minutes later, taking on a number of Wigan defenders before eventually being dispossessed on the edge of the box.

Wigan were allowed a rare chance as captain Joe Garner found a teammate wide open down the left, seeing them break towards goal and get a shot away, only to see it sail wide of Fisher's far post.

Walker was replaced with 20 minutes left in the match, with Joe Mason making an appearance and almost immediately increasing the Dons' lead.

Jerome whipped a ball over to Mason, who cut back inside in the penalty area and curled a shot narrowly wide of Jones' far post, with Jerome sliding in late to try and give the Dons a three goal lead, keeping the visitors under pressure.

Desperate to get back into the game, Wigan began to see more and more of the ball, breaking towards goal and trying to use set pieces to cause the Dons problems in their own half.

The visitors nearly got lucky with their renewed efforts, with Fisher caught out in the middle of his box, leaving an open net for Wigan to shoot into, only to see their effort blocked.

This proved to be the closest Wigan would get in this one, however, as the Dons held on to claim all three points and a convincing 2-0 score line, seeing goalkeeper Fisher earn a clean sheet in his first home appearance for the club.