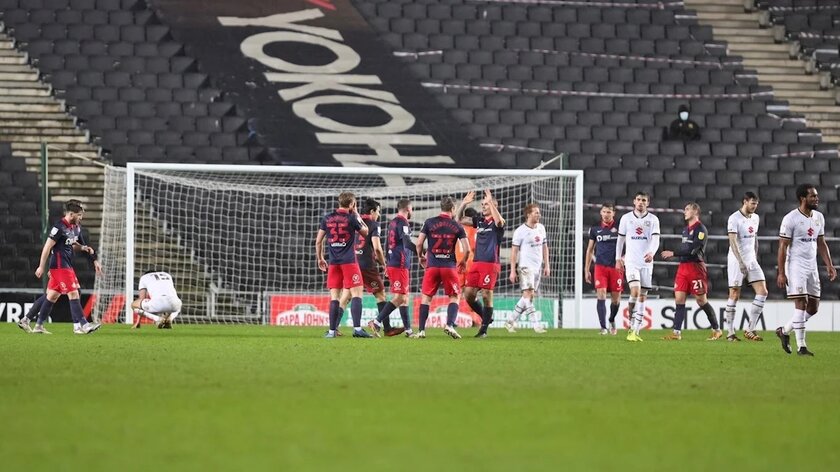 Milton Keynes Dons' run in the Papa John's Trophy has come to an end, courtesy of a 3-0 loss to visitors Sunderland.

The Black Cats asserted themselves in the early stages of the match, getting plenty of pressure on the Dons' defensive line, keeping the home side hemmed in their own half for long periods of time.

Joe Mason had an opportunity to make something for the Dons after some neat passing, including a flick-on by Daniel Harvie, allowed the striker to break into the Sunderland box, but his hesitation meant that no shot was taken and the visitors escaped danger.

Despite some moments of improved play, it was the visitors that took the lead thanks to Jack Diamond's cross/shot deflecting off captain Dean Lewington, who had thrown himself in front of the ball in hopes of blocking it.

The deflection sent goalkeeper Lee Nicholls the wrong way and it rolled into the open net much to the disappointment of the home side.

Play evened out between the two sides after the goal, with the Dons growing in urgency and taking chances wherever they came, with Mason forcing Remi Matthews into making a save down low after a strong shot from just inside the box.

Lewis Johnson also had a chance to pull the Dons level, poking a close-range shot but seeing his effort blocked and cleared just in front of the goal mouth.

The two sides entered the half-time break with the visitors holding onto their lead, while the Dons began to grow in confidence.

Matthew Sorinola had an excellent chance early in the second half, cutting inside and onto his right foot, lofted a shot from the edge of the box but seeing it deflected narrowly wide for a corner.

Scott Fraser had a superb shot saved by Matthews after 67 minutes of play, teed up by Mason on the edge of the box.

The visitors began to regain themselves as the second half progressed, with Aiden McGeady, after capitalising on a Lasse Sorensen header, driving home a low shot that Nicholls couldn't keep out, seeing the ball slip into the back of the net.

The Dons' misery was piled onto minutes later with Sunderland adding a third goal, with a header inside the box beating every Dons player, including Nicholls.

An offside flag spared the Dons' blushes moments later with McGeady free in on goal, preventing the visitors from extending their lead further.

The deflated Dons will have a chance at retribution this Saturday, with Sunderland once again travelling down to Stadium MK for a League One fixture, with Russell Martin's side able to call on a number of players that were cup tied, such as Zak Jules, Harry Darling and Ethan Laird.

Now their cup journey is over, the Dons have the sole focus on the league and can put all attention to keeping their positive climb up the table going.