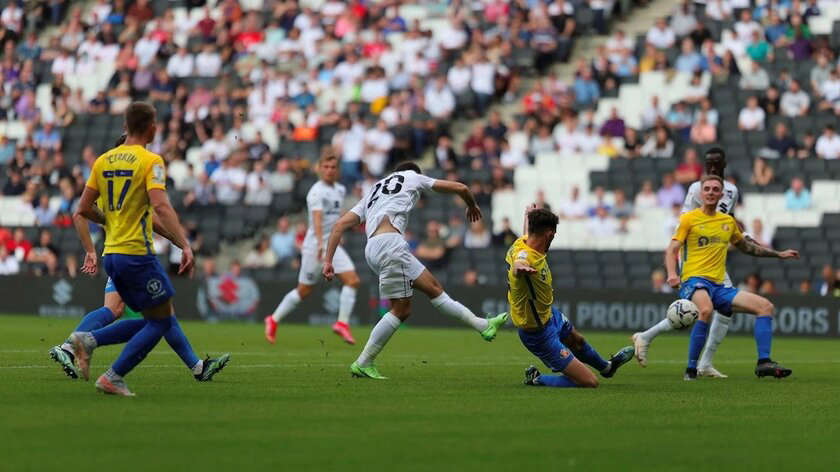 Milton Keynes Dons suffered a 2-1 loss to Sunderland in their first league fixture at Stadium MK this season.

The match came following the hiring of new Dons head coach Liam Manning, who stood in the dugout of his new club for the first time.

After the 3-3 draw against Bolton, the Dons opted to make just one change - seeing starting goalkeeper Andrew Fisher return to his spot after missing the past two matches due to injury.

The opening ten minutes of the match were largely uneventful, with both sides taken the ball end to end - but with few opportunities opening up in front of goal.

Scott Twine found himself shoved to the ground by Elliot Embleton after the Dons man picked up the ball at the referee's whistle for a Sunderland free kick - both players received words for their actions.

Andrew Fisher was then forced into making a couple of important saves to keep the visitors at bay around the 12 minute mark, keeping things level as the Black Cats grew in confidence.

The match saw plenty of physicality from both teams, with Lynden Gooch struggling to deal with Zak Jules' presence, charging into his back after finding himself dispossessed moments earlier, while Ethan Robson was lucky not to be penalised for a 50/50 challenge on Corry Evans minutes later in the middle of the pitch.

The Dons had a glorious chance to open the scoring when Daniel Harvie hit a low cross into the box, with Mo Eisa lurking.

A Sunderland defender managed to get a toe to it and narrowly tip it out for a corner, saving his team's blushes minutes before the half-hour mark.

Tennai Watson then threatened to score moments later after a neat passage of play saw Harvie this time find his man deep in the box, only for the defender to send a shot over the bar.

Scott Twine earned his side a free kick in a similar area to where he scored from against Bolton last week, but his effort comfortably sailed into the arms of goalkeeper Lee Burge.

Sunderland themselves came close in the 38th minute when a curling ball into the box found the head of Ross Stewart, with Fisher managing to get his body in the way and collect the ball inside the six-yard box.

The visitors took the lead in the 42nd minute after Fisher palmed an effort tamely away, seeing the ball drop to Stewart in the box to tap it home.

After just one minute of added time, the two sides headed down the tunnel with the visitors holding a 1-0 lead and with the Dons looking to find a way to put their effort and chances into goals.

Sunderland started the second half in the same manner they ended the first, putting plenty of pressure on the home side and brimming with confidence in the attacking third.

After a nervy five minutes, the Dons grew into the second half and began pressing forward themselves.

The positive momentum was lost when the Dons players suddenly stood still expecting an offside call to be made against Embleton. None came and the midfielder lofted the ball past Fisher and extended the visitors' lead to two in the 53rd minute.

The visitors' lead was cut in half minutes later when Troy Parrott netted his first goal in a Dons shirt.

Burge's goal kick was intercepted by Robson, who took the ball forward before passing off to the Republic of Ireland international, who coolly slotted home a clean shot out of the keeper's reach.

Parrott could have pulled his side level moments later when Matt O'Riley's pass narrowly missed his outstretched foot deep inside the Sunderland box - with the home side building confidence once again.

Mo Eisa had a chance to level the score when he combined with Parrott, who tapped a pass out to his strike partner - with the former Peterborough man almost rounding Burge and sending a shot goal-wards - only for the keeper to get a touch and send it out for a corner.

Parrott then tried his luck from range minutes later with a chipped effort that forced Burge, who was off his line, into tipping the ball over the bar and out for a Dons corner.

Sunderland seemed destined to extend their lead when Harry Darling pulled down Ross Stewart in the box, gifting the visitors a penalty.

Fisher stood firm and saved the low effort from Gooch to the rapturous applause of the home crowd, keeping things close at 2-1 with over five minutes remaining in the game.

Josh Martin came close to scoring deep into stoppage time, working his way through the Sunderland defence before cutting onto his left foot - Burge standing steady to collect the ball comfortably.

Despite plenty of bright spots throughout the game, with Troy Parrott looking assured up front and the return of Josh McEachran showing how important he is to this team, the Dons were unable to find that all important second goal.

The final whistle blew after seven minutes of time added on, with the Dons suffering defeat in their first home league fixture of the season.

The Dons don't have long to dwell on the result, with Charlton Athletic travelling up the M1 to Stadium MK on Tuesday night - with matches starting to come thick and fast once again.