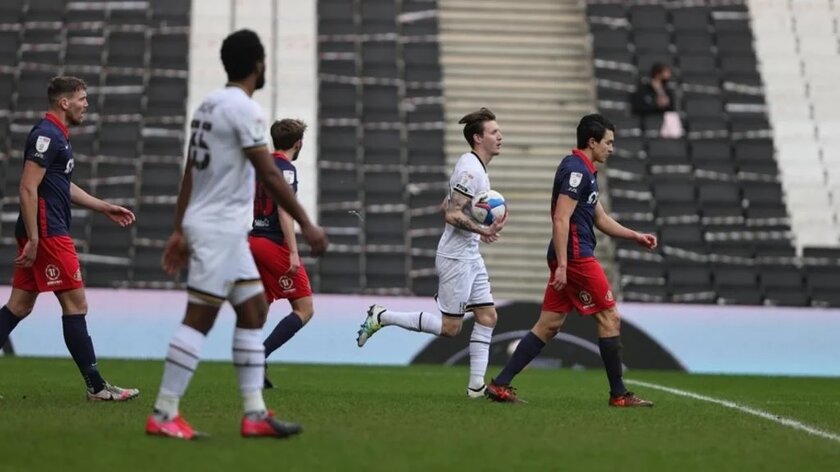 The Dons entered the match hoping to make amends for their disappointing exit from the Papa John's Trophy against the Black Cats on Tuesday night.

But once again, it was the visitors that took the early lead thanks to a Charlie Wyke goal. Wyke received the ball inside the Dons box from an unchallenged Aiden McGeady, slotting the ball inside Fisher's far post as the Dons defence attempted to regroup.

What was different to Tuesday's match, however, was that the Dons were able to get back into the match almost immediately through a Joe Mason equaliser.

After seeing the ball skim across the goal mouth, Harry Darling managed to send the ball back into the Sunderland box, with the Dons seeing a shot by Scott Fraser and a couple of close-range Cameron Jerome efforts palmed away by Lee Burge and into the path of Mason, who had the simple job of tapping the ball into the back of the net.

Both sides had the share of possession following the Dons' equaliser, but the home side took the lead thanks to Jerome's near-post tap-in.

Matt O'Riley linked up well with Ethan Laird on the right side of the box, before whipping in a low-driven cross that allowed Jerome to slot the ball into the net with Burge unable to do anything.

The visitors almost came back into the match immediately, with Charlie Wyke running in on goal. Harry Darling did well to stay close to his man and stifle his effort, allowing Andrew Fisher to save the ball comfortably and preserve the Dons' lead.

Another defensive lapse on the half-hour mark allowed Wyke in again, but the Sunderland striker lofted his shot over the bar.

The Dons continued to put pressure on the visitors during the first half, but the Black Cats were the side with the better chances and Russell Martin's men will have been pleased to head into the half-time break holding onto their one-goal lead.

The home side came out firing to start the second half, putting plenty of pressure on Sunderland with Mason coming agonisingly close to extending the Dons' lead.

However, it was the Black Cats that netted the next goal thanks to Luke O'Nien's close-range effort. Aiden McGeady initially took  a shot that looked to be going wide, but O'Nien intercepted, turned and slotted the ball past Fisher to tie thing up at 2-2.

The visitors had another real chance to take the lead with McGeady's low shot being saved by Fisher, who was able to recover well and smother the rebound.

The Dons themselves had two well-worked passages, with the ball crossed deep into the penalty area, but neither time could Laird or Jerome respectively guide the ball on target.

The two sides battled throughout, contending with some questionable decision making from the officials, but neither side could break the deadlock, with Fisher saving the Dons from disappointment with a 96th minute save on a wide open McGeady shot.

Eventually, the final whistle blew and the match ended with the spoils shared at 2-2.