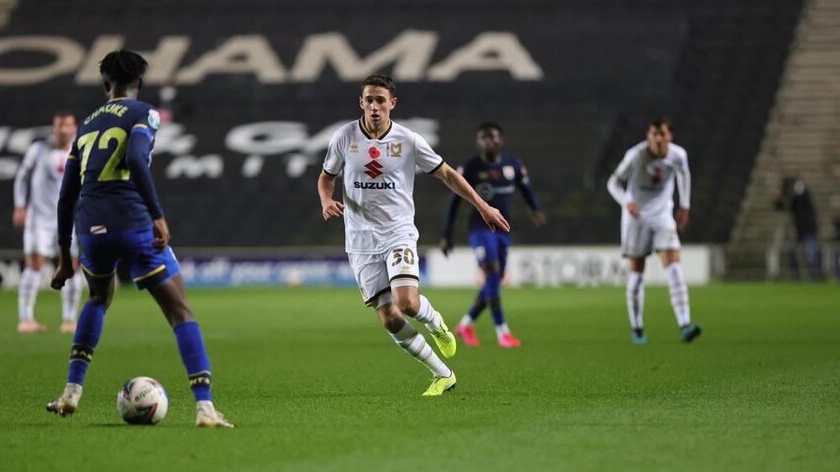 Milton Keynes Dons suffered a 2-1 loss at home to Southampton B on Wednesday night, with the visitors scoring deep into extra time in their final group match of the Papa John's Trophy.

The match started lively, with the Dons winning an early corner thanks to some nervy play and miscommunication between Southampton goalkeeper Harry Lewis and one of his defenders, whose strong pass back slid out of reach.

The home side couldn't do anything with the set piece, however, but continued to battle. With a few veteran players in the starting eleven, their experience shone through early on in the match, with the Dons pressuring the young Saints players often.

Despite the early domination, the Dons were caught napping in their own box and allowed Southampton to take the lead through Sam Bellis, who managed to intercept a pass back to goalkeeper Laurie Walker, sliding the ball into the far corner.

The Dons threatened minutes later when David Kasumu's stretch pass reached Lasse Sorensen out to the right. The Danish midfielder whipped in a cross deep into the box but was unable to reach a diving Carlton Morris, who would have certainly put the ball into the net had he connected.

Moments after, Scott Fraser weaved his way through a number of opposition players, earning his side a corner after he couldn't get a shot in on goal. The Dons managed to earn a shot from the ensuing set piece, with Fraser once again involved, seeing his effort deflected out for another corner.

Despite the persistent pressure, and once again dominating possession, the Dons entered the half trailing thanks to Bellis' unusual goal.

Matthew Sorinola brought the Dons level just over a minute into the second half. With a long ball from Bailly Cargill bouncing over Lewis, the young Dons wing back beat the final defender to tap the ball into an empty net.

The visitors almost immediately responded, however, with Laurie Walker forced into making a strong save at point-blank range to keep Caleb Watts from putting the young Saints back ahead.

The two sides continued to share possession and battle for chances at either end, with Louis Thompson, introduced at half time, rushing down the right flank to provide some support out wide - only to see his cross attempt blocked by the first defender.

After a largely uneventful second half, seven minutes were added on to the regulation 90, which was enough time for the visitors to snatch victory through Kazeem Olaigbe, who latched onto a loose pass and sent the ball beyond Walker's reach in the 93rd minute.

Despite the loss, the Dons progress into the next round of the Papa John's Trophy, but will need to wait to wait for the result between Northampton Town and Stevenage to see whether or not they go through as winners of Group K.