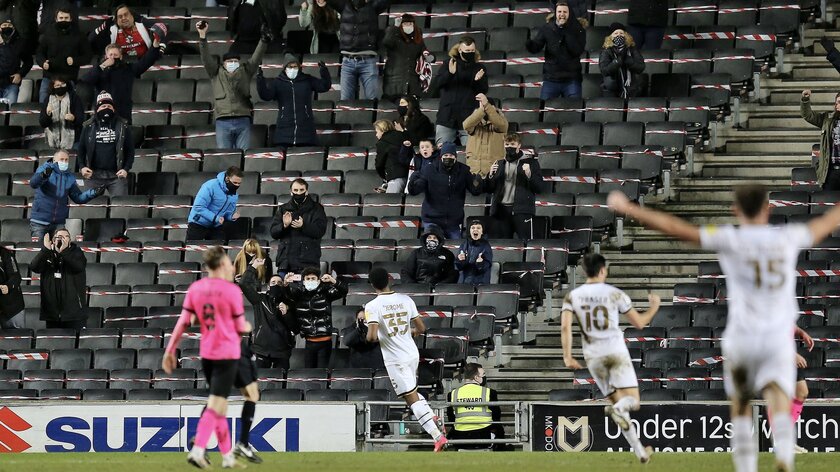 Milton Keynes Dons fought back from another deficit to earn a point against Peterborough United in a tense affair at Stadium MK.

Cameron Jerome's fifth league goal of the season helped the Dons claim a point after finding themselves a goal down in bizarre circumstances.

The Dons started the match brightly and could have opened the scoring after just four minutes, with some superb passing around the Peterborough box allowing Lasse Sorensen a strong header at the back post.

The Danish midfielder, on loan from Stoke City, was unable to keep his header low, however, seeing his effort zip just over Christy Pym's crossbar.

The first 15 minutes of the match heavily favoured the home side, who caused the Peterborough defenders a number of headaches with smooth passes, crosses around the box and a flurry of shots.

Cameron Jerome had a strong, low-driven free kick effort saved by Pym as the Dons continued to knock on the door, a clear difference from how the team started their tie against Burton Albion last Saturday.

Jerome was once again involved as George Williams sent a threatening cross deep into the Peterborough box, with the veteran striker lurking and ready to pounce before the visitors' defender managed to make a last-ditch clearance.

In a shocking turn of events, it was the visitors that took the lead with the softest of headers beating goalkeeper Andrew Fisher after 25 minutes of play.

Dons players and staff alike raised questions with the linesman, feeling there had been a push in the passage of play that led to the goal, but their protests were ignored and they found themselves 1-0 down despite clearly being the more dominant of the two sides up to that point.

Tense moments followed, with some questionable decisions by the referee prompting some serious protests and questions by the Dons coaching staff, seeing Dean Thornton (Goalkeeper Coach) and Luke Williams (Assistant Manager) both booked for their line of questioning.

Despite some further pressure and half-chance, the Dons entered the break 1-0 down.

The Dons came out for the second half trying to maintain the pressure on their opponents, seeking a way back into the match.

A nice passage of passing around the Peterborough box threatened within five minutes of the restart, with Morris, Fraser and Jerome all moving the ball around well before Sorensen took a shot on the edge of the box, which the visiting side blocked enough for Pym to collect.

The pressure continued to come from Russell Martin's men, who were once again battling against a team sitting deeply and defending everything thrown at them.

But it wasn't enough to keep the home side from levelling as Scott Fraser played the perfect through pass to Cameron Jerome, who ran into the Peterborough box and coolly slotted home in the 76th minute to bring the game level at 1-1.

The score remained as such as regulation time expired, but the fourth official indicated for an additional six minutes of play thanks to the many stoppages in this match.

Despite the additional time, the Dons were unable to capitalise on their increased pressure and possession. Daniel Harvie lofted a ball into the far corner of the penalty area with less than a minute left in stoppage time, but Regan Poole was unable to reach it, with the referee blowing his whistle moments later and bringing to a close the match and seeing the Dons earn a point.