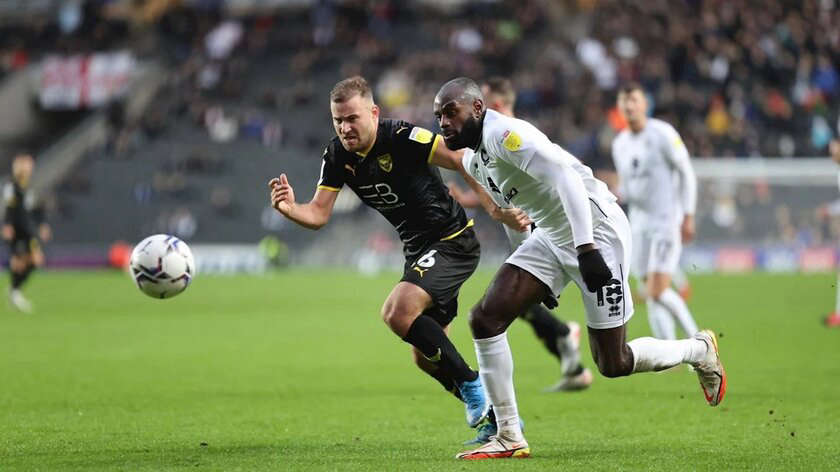 Milton Keynes Dons suffered a 2-1 loss to Oxford United at Stadium MK, despite taking a lead early in the first half.

Hiram Boateng scored in the 11th minute, but defensive errors and goals from Matt Taylor and Mark Sykes ensured the visitors left Milton Keynes with all three points.

Entering the match, Oxford United had not lost in League One since October 16th, presenting Liam Manning's side with a tough challenge on a cold wintry afternoon.

The visitors started the match on the front foot, earning a dubious free kick deep inside the Dons' half before making a few progressive runs into the final third, even seeing a goal wiped out for offside after less than five minutes.

The Dons tried to settle things down with some positive moves of their own, with Tennai Watson making a quick run down the right before the ball ended up with Daniel Harvie - the Scotsman picking up a threatening free kick 25 yards out.

With Scott Twine unavailable due to COVID-19 protocols, Troy Parrott was the man to take the dead ball - with his effort narrowly deflected and falling for goalkeeper Simon Eastwood to gather.

After settling play down, the Dons struck first after Hiram Boateng's left-footed shot rounded Eastwood in front of the visiting fans. The play began with Harvie lofting a well-placed pass to Parrott, who simply played the ball out wide to the racing Boateng, who now has three league goals this season.

The Dons forced Eastwood into a save moments later, with the visitors then appearing to have scored through Matty Taylor on the counter attack - only to see yet another offside flag raised.

After sitting back for much of the match against Plymouth, the Dons showed a determination to continue attacking Oxford, with a number of entries into the visitors' box and the link-up play between Harvie, Boateng and Parrott the driving force for much of the first half.

In a surprising error, Fisher gifted the U's with a chance to equalise with just a handful of minutes left in the half. His pass out from his box found Cameron Brannagan 20 yards out, but the Oxford man's effort flew well over the bar and spared the Dons keeper his blushes.

The half-time whistle blew with the home side holding onto their slim lead, having enjoyed the majority of possession and slightly more chances than the visitors.

The Dons started the second half immediately on the attack, with Parrott racing forward and sending a promising cross towards Matt O'Riley, seeing it deflected out for a corner.

Moments later and Oxford saw the ball flash across the face of the Dons' goal, before Brannagan curled an effort from the edge of the box wide - continuing the fast-paced and attack-minded football experienced in the previous 45 minutes.

The home side broke forward on the counter attack after more than 10 minutes into the second half, with Parrott once again trying to find O'Riley inside the box, only for the low-hit cross to be blocked and cleared away.

Oxford began to take control of the match from that point, keeping the Dons hemmed inside their own half and regularly getting ball into the attacking third.

The sustained pressure saw the visitors tie things up in the 65th minute, with a free kick deep into the Dons' half finding the head of Taylor, who beat Fisher from close range to pull the score to 1-1.

Oxford should have added a second in the 77th minute, with the ball sent across the face of the Dons goal with Fisher out of position, only for the Dons defence to make a last ditch interception and clear away the danger.

Fisher's attempt to clear a poor pass from Josh McEachran moments later was intercepted, leaving the Dons goalkeeper well out of position as the ball found Sykes on the edge of the box with a wide open goal to tap the ball into.

Charlie Brown almost pulled the Dons back level less than two minutes later, sliding into Tennai Watson's low cross and forcing Eastwood into getting his body in the way to deny the striker.

O'Riley came close with less than five minutes remaining, with a neat one-two touch to himself to skip past the Oxford defence, seeing a rolled effort go just wide of Eastwood's far post.

Ethan Robson had a free kick after added time had expired, after Jordan Thorniley was shown a red card for bringing down Brown as the last man on the edge of the penalty area. His effort, however, flew straight into Eastwood's arms.

Despite the five minutes of time added on, the Dons were unable to find a way back into the match and will rue the chances they were unable to take as they drop points after leading in consecutive matches.