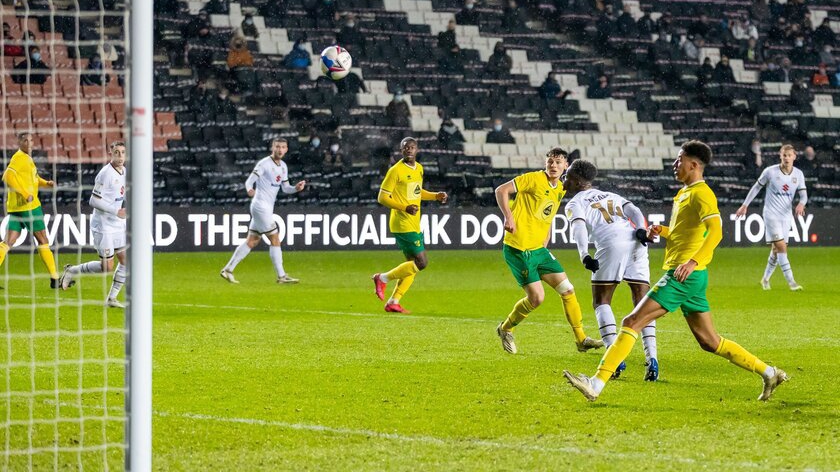 Milton Keynes Dons claimed a dominating 6-0 victory over Norwich City Under 21s in the second round of the Papa John's Trophy.

In the first match with fans allowed back in Stadium MK, everything they could have ever wished for was on display as the home side dominated throughout and comfortably progressed into the next stage of the competition.

The match also saw the return of striker Kieran Agard to the first team, with the 31-year-old involved in a positive passage of play early on, his well-timed flicked header allowing Matthew Sorinola to charge down the left flank before his low cross was blocked and cleared away.

The Dons looked the more threatening of the two sides during the first 25 minutes of the match, retaining possession well and doing their best to keep the young Canaries at bay.

Sorinola had a free shot just over half-way through the first half, collecting the ball from a wayward pass on the edge of the box before pulling his effort just wide of Jon McCracken's right-hand post.

Agard was once again involved after the half-hour mark, racing towards the box down the right flank before seeing his low-driven shot hit the side of the Norwich net.

After missing so much time with injuries and being further down the pecking order this season, it was Agard who opened the scoring with a perfectly placed header from inside the box, receiving the ball from a Regan Poole cross.

Agard almost added a second moments later with a hard shot being cleared from a defender who put his body in the way after McCracken found himself out of position, with Lasse Sorensen seeing his own shot suffer the same fate after the rebound.

Another close chance came for the Dons' third-highest all-time goalscorer, as a well-hit Sorinola cross narrowly missed him in front of the Norwich goal, with the veteran showing his experience and quality over his youthful opponents early on.

Stephen Walker tried to get in on the action just minutes before the break, taking on the Norwich defenders before smashing a shot across the face of goal and narrowly wide.

The visitors weathered the storm well enough to keep the home side from extending their lead, with the two sides entering the half-time break with the score still 1-0 to the Dons.

The Dons continued to assert their dominance in the second half and it only took ten minutes of play before they found themselves 2-0 up.

Lasse Sorensen cut inside the penalty area and lofted an expertly placed curling shot, hitting the far-side top corner to the rapturous cheers from the Dons fans in attendance.

The Dons' lead was extended to three when Regan Poole rose above every defender around him to head the ball firmly into the back of the net, latching onto an excellent cross from Sorensen.

After some back-and-forth play, the Dons truly put the game to bed with Stephen Walker's low-driven shot coming after a short corner from Sorinola, seeing the on-loan Middlesbrough striker drive into the Norwich box and cut inside before putting the scoreline even further out of reach.

Agard scored his second of the night with 15 minutes left to play, tapping in a Poole cross right at the goal mouth to put Russell Martin's men 5-0 with plenty of time left in the match.

The Dons extended their lead further with Poole slamming home a close-range effort, his second of the night, just moments after Agard was denied a hat trick and 16-year-old Lewis Johnson was denied opening his account for the Dons after some last ditch saves and blocks.

The match was an exceptional return to form from the Dons, who progress into the next round of the competition comfortably and full of confidence ahead of their next match at home against Burton Albion this Saturday (12th December).