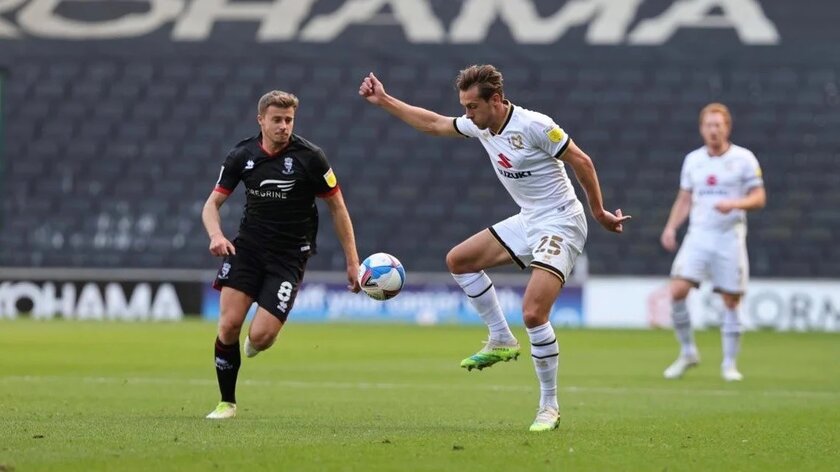 The Dons had a great opportunity to take the lead when Joe Mason came close early on, with his effort inside the Lincoln box. A low cross from Regan Poole reached the striker but his effort went narrowly wide of the keeper's post.

Controversy struck early on as Lincoln took the lead after just ten minutes into the game thanks to a dubious Jorge Grant penalty.

As Tom Hopper charged his way forward, Dean Lewington and Baily Cargill covered him, with the latter making a well-timed clearance. Hopper, however, fell to the ground inside the Dons' box and referee Brett Huxtable pointed to the spot.

Dons players furiously protested the call, but their calls went unanswered and Grant sent Nicholls the wrong way - giving the visitors the lead.

Going down early preceded some nervy play from the Dons, with the visitors working in the spaces behind the wing-backs and causing problems - with the home side growing increasingly frustrated with some decisions going against them.

The Dons had an opportunity to cause Lincoln problems with a Regan Poole free kick on the edge of the area. The strong shot, however, rocketed off former Dons man Conor McGrandles, with the game being halted for a moment as he remained on the ground from the impact of the shot.

Besides another Poole shot, which pulled well wide of the goalposts, the Dons never truly threatened the visitors in the attacking third and entered the half 1-0 down.

The Dons came out from the break brighter than how they ended the first half, but Lincoln almost caught them napping with a free kick from the half-way line finding James Jones charging towards goal.

A last-ditch touch from David Kasumu knocked it beyond his reach in the box and safely back into the hands of Nicholls, keeping the Dons within reaching distance of their opponents.

Nicholls was forced into making the save of the game around the 53 minute mark when a Lincoln cross found Harry Anderson deep inside the Dons box. His low-driven shot from close range out parried away by the Dons keeper.

The Dons persisted in their renewed efforts in the second half, being rewarded with a Joe Mason goal after a scrap for the ball on the edge of the Lincoln box.

Callum Brittain attempted to thread a pass through to Regan Poole who was able to narrowly flick the ball over the defensive line, with Mason collecting and tapping the ball beyond goalkeeper Alex Palmer, despite protests for offside from the Lincoln players.

The Dons, growing in confidence, began taking their chances in the Lincoln half with less than half an hour left to go in the game. Matthew Sorinola received the ball on the edge of the box from a corner and sent a low shot through, seeing it blocked.

Lewington, receiving the ball from the block forced Palmer into making an excellent save as his curling shot looked destined for the far bottom corner.

The Dons' efforts were nullified when Tom Hopper rose above the defence to head in Lincoln's second goal of the game.

In a game full of controversy, Cargill appeared to have been hit in the face by Harry Anderson, with the linesman keeping his flag down and allowing the assisting cross into the box.

Lincoln began to build from the momentum of their second goal, with James Jones having a close-range shot blocked by Nicholls was forced into an impressive save against Max Melbourne, once again from close range.

Recent signing Scott Fraser made his debut for the club, replacing Poole in the 85th minute of the game.

Mason once again had a chance to bring the Dons level in the dying minutes of the game, seeing his stunning close range shot saved by Palmer.

A late flurry from the Dons couldn't save them in this one, with the referee blowing his final whistle and consigning the home side to their first loss of the season.