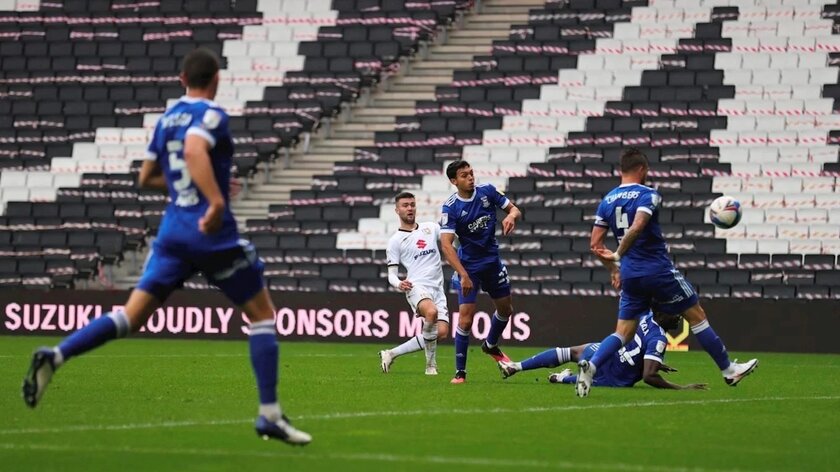 Milton Keynes Dons have earned a well-deserved point against Ipswich Town, but will have felt that they could've won in the end.

A second-half goal from Daniel Harvie secured the Dons their second point of the League One campaign, but their efforts throughout will have them feeling that they should have had more from the match.

The Dons started the match the brightest, pressing inside the Ipswich half, but Jon Nolan opened the scoring after Richard Keogh gave the ball away deep inside the Dons half.

Gwion Edwards crossed the ball into the box and the Dons defence couldn't handle the number of Ipswich shirts piling inside, with Nolan tapping the ball in after a scrambling attempt at a clearance.

The setback appeared to have a knock on the Dons' confidence, with the home side playing a lot more desperately and gifting the visitors a free-kick inside their half, leading an Ipswich corner, with Russell Martin's men struggling to retain possession.

The Dons looked to have been rebuilding momentum as Carlton Morris collected the ball and looked set to break, but Lasse Sorensen overran his squared pass, leading to the visitors breaking down the other end.

Freddie Sears came close to putting the visitors up 2-0 with a bending shot from outside of the box, but it narrowly went wide of Lee Nicholls' far-side post, keeping the Dons within touching distance.

The Dons began to grow in confidence once again as the match progressed, with a flurry of efforts in the Ipswich box around the half-hour mark, with blocked shots, headers away and a corner leading to a free-kick deep in the Ipswich half.

The home side couldn't convert on any of their chances, however, but kept pushing, trying to become the first team to score against Ipswich this season, with Morris snatching a shot on the edge of the box moments later - seeing his effort blocked with the Ipswich keeper chasing it down and well off his line.

The Dons, however, were lucky not to be down to ten men around the 36th minute mark, with Daniel Harvie reacting poorly to a challenge on him, resulting in a free-kick after Luke Chambers remained on the ground holding his ankle - requiring the fourth official to confirm to the referee what happened.

Joe Mason continued to impress in this game with a number of chances before the half, coming close with an effort deep inside the Ipswich box that was saved by goalkeeper Tomas Holy, keeping the Dons knocking on the door.

Despite coming close a number of times, the two sides entered the half with the Dons still trailing 1-0.

The Dons began the second half brightly, racing down the other end and Harvie getting a cross into the box and maintaining plenty of pressure on the Tractor Boys early on.

Martin's side felt they should have had a penalty five minutes into the second half as Scott Fraser appeared to have been pulled down in the box as he attempted to get a shot off, seeing his effort go wide, but the referee ignored the appeals.

The maintained pressure was rewarded as Daniel Harvie brought the Dons level around the 55 minute mark.

The play began with Mason using his strength to get the ball to Lasse Sorensen at the halfway line, with the Danish midfielder breaking down the right flank before whipping a cross into the box.

Morris couldn't reach the ball but it found Harvie, who floated a perfectly placed shot into the far corner of the Ipswich goal.

The Dons continued to maintain pressure, with Brittain having a headed chance from a free kick, but the ball travelled backwards and ended up out for a goal kick thanks to a Sorensen block.

Morris, meanwhile, came close with an effort inside the six-yard box that was scooped up by the Ipswich keeper, with the visitors forced into playing with just ten men after Flynn Downes injured himself in a tackle on Morris just minutes after being introduced into the match.

The Dons piled on with an edge of the box shot from Fraser that was parried by Holy, with Callum Brittain smashing a hard shot into the keeper's chest from close range and forcing another corner.

After the initial corner ended back out for another, the follow-up saw Harvie try his luck from distance, seeing his shot float well over the crossbar.

Harvie was involved in another close effort for the Dons as George Williams, in his first start of the season, whipped in a perfect ball that Holy misjudged, seeing it slip behind him.

Harvie latched onto the free ball but it flew out for a goal kick with the young Scot unable to direct it goalward.

The Dons continued to battle for the win with a number of late flurries, certainly looking the better side throughout the second half, but they couldn't quite get that final touch needed to break the deadlock and earned just a point from the match.