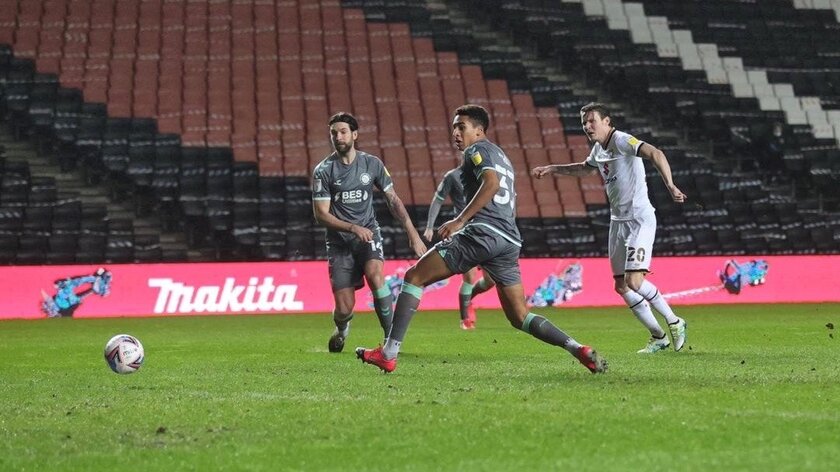 Milton Keynes Dons have claimed victory in their first home match of 2021, thanks largely to Joe Mason's first half hat trick.

Some serious confusion early on in the match saw the linesman flag for an offside against Fleetwood. Play continued, however, and the visitors were awarded a corner, which raised some strong protests from the home side.

The early tension was alleviated, however, as Joe Mason opened the scoring for the Dons and put them 1-0 ahead after just four minutes of play, with on-loan wing back Ethan Laird pulling the ball back to the experienced striker to slot the ball into the back of the net.

The Dons could have extended their lead after 12 minutes, with Cameron Jerome placing a header at the feet of Scott Fraser to set up Lasse Sorensen, who saw his well-placed shot palmed away by Joe Hilton.

It was the home side that scored the second of the game, with Mason latching onto a ball left by Fraser and smashing home for his second of the night; leaving Hilton standing, with no chance to react.

Full of confidence, Mason netted his hat trick goal before the half-hour mark, pouncing on a mistake from Charlie Mulgrew and running in alone on goal before slotting coolly past Hilton.

The Dons continued to pressure their opponents, spreading the ball across the pitch with pace, and could have even added to their lead, but ultimately headed into the break 3-0 up.

The visitors came out for the second half with renewed spirit and almost brought themselves back into the match, firstly from a scramble at the goal mouth that was ultimately gathered up by Fisher before Finley struck the crossbar with a strong ranged effort moments later.

The Dons, however, came close to making it 4-0 when Fraser stole the ball inside the Fleetwood box and was allowed to get a close-range shot away, seeing his effort blocked by Hilton and sent out for a corner.

Some heroics were needed from Fisher halfway through the second half to keep the visitors at bay, with Sorensen having an opportunity to latch on to the ensuing clearance, seeing his shot tipped narrowly over the bar by Hilton.

The visitors eventually found the back of the net through a firm Finley strike on the edge of the penalty area, leaving Fisher rooted to the ground surprised, with around six minutes left in the match.

Fisher was once again called into making a fantastic save as Fleetwood continued to pressure, getting down low to keep the Dons' lead at two with four minutes of added time still to be played.

The Dons endured a barrage of chances from the visitors in the dying minutes of the match, Fisher tested multiple times and could have easily seen Fleetwood find the back of the net a number of times and stolen some points.

It wasn't to be, however, and Russell Martin's side claimed all three points to earn a victory in their first home match of 2021.