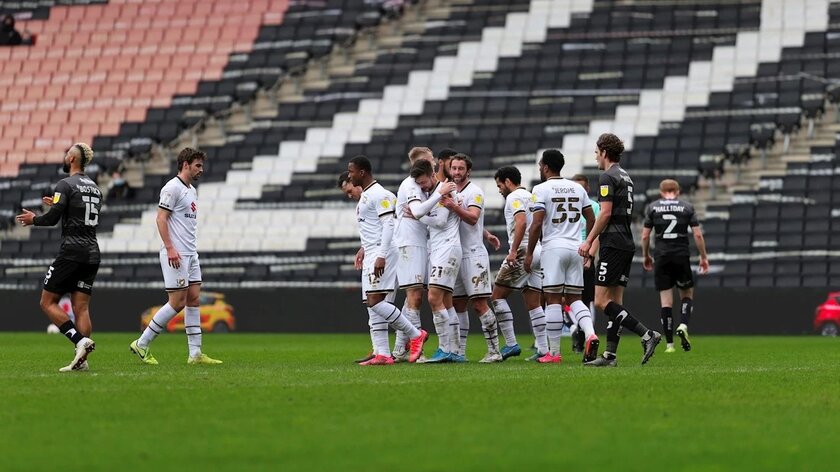 The Scottish wing-back's right-footed effort from inside the Doncaster box ensured Russell Martin's side claimed their fourth consecutive victory, keeping them sitting comfortably mid-table with just eight fixtures remaining of the 2020/21 League One season.

The Dons took control of the match in the early stages, pressing high in the Doncaster area before the visitors themselves began to bare their teeth.

A few breaks into the Dons box were dealt with before the first real chance of the match came before the half-hour mark.

Daniel Harvie, playing on the right side, whipped a well-placed cross into the box on his right foot, finding a wide open Will Grigg in the middle.

The on-loan striker headed the ball cleanly, forcing Louis Jones into making a perfect save down low to keep both sides tied up at 0-0.

The Dons once again threatened to open the scoring when Harvie's rocket of a shot flew beyond the reach of Jones, only to be denied by the far-side post.

The ball bounced back in front of goal but the chasing Grigg was unable to get enough to it, seeing it stopped and sent out for a corner, the visitors narrowly holding on just a few minutes before the end of the first half.

Martin's men continued to put pressure on Doncaster's defensive line, with some panicky moments causing the visitors plenty of problems before the whistle brought the half to an end with both sides scoreless.

The Dons started the second half lively, with Louis Thompson collected a flick-pass from Grigg before charging in towards goal.

After beating his man, he got a shot off inside the box, seeing Jones tip it over and give the home side a corner after just mere seconds after the restart.

The visitors, however, came close minutes later after a Matt O'Riley mistake allowed Jason Lokilo to get a dangerous-looking shot away on the edge of the box, with Harry Darling's sliding block reaching him again, with his follow-up zipping high and wide, keeping the home side in it.

The Dons themselves came close after O'Riley's low cross reached an outstretched Grigg inside the box, seeing the striker get a tame toe to the ball, with Jones able to collect with ease from inside the six-yard box.

After a period of sustained pressure from the visitors, the Dons regained their footing and began to press higher up the pitch.

Their efforts were rewarded with Harvie opening the scoring in the 75th minute, receiving a cross-pass from O'Riley.

With a defender in front of him, Harvie took his time before cutting inside on his right foot, sending the ball into Jones' far corner and giving the home side a 1-0 lead with just under 15 minutes remaining in regulation.

The Dons managed the match as time ran down, controlling the ball and keeping Doncaster at bay. Five minutes were added to regulation, giving the home side enough time to threaten in front of goal once again.

Ethan Laird snuck a low-driven cross into the middle of the box, but Cameron Jerome was unable to get much on the ball, seeing it deflect away.

A moment of confusion in the dying seconds of stoppage time almost saw the Dons come undone, with Fisher chasing the ball but seeing it go beyond him. Darling, fortunately was there to clear and see away the danger.

The final whistle blew after another few moments of pressure from Doncaster, securing the Dons all three points - extending their run of strong performances.

The Dons have now claimed victory in four consecutive matches, the first time that has been achieved by the club since March 2019.

The win puts the Dons just three points away from the final playoff place, giving the team plenty of comfort and breathing space with just eight matches remaining of the season.

A trip to Lincoln City on Good Friday is followed closely by Crewe Alexandria's visit to Stadium MK on Easter Monday, with matches coming thick and fast as the race towards the final standings heats up.