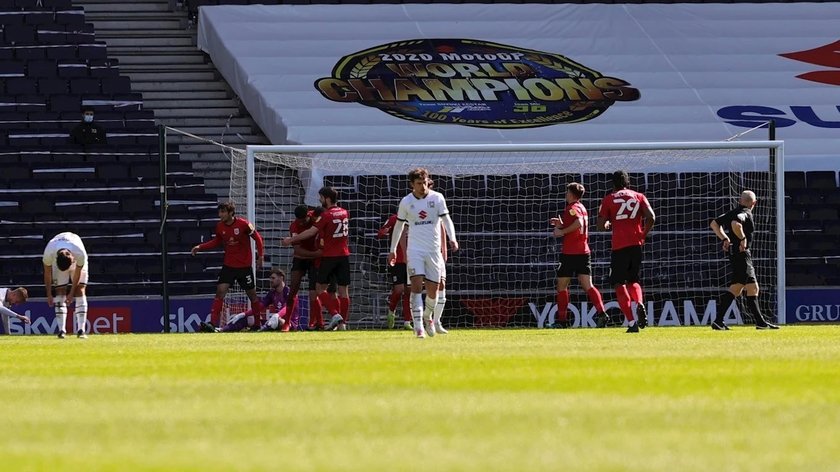 Milton Keynes Dons' winning streak is over after a disappointing 2-0 defeat to Crewe Alexandra at Stadium MK.

Two Mikael Mandron goals in the first half came as a result of a disappointing half an hour from the Dons to start the match, with a number of late chances to pull themselves back into the match denied by some goalkeeping heroics from Will Jaaskelainen.

The first real chance of the match came when the Dons gave away a free kick around 25 yards away from their goal, with Andrew Fisher forced into making an excellent diving save from close range.

A scramble ensued in the box, but the Dons were able to clear the danger with less than five minutes played in the half.

Minutes later and the Dons thought they themselves had opened the scoring.

Matt O'Riley intercepted a pass on the edge of the Crewe box, with a few Dons getting touches before Cameron Jerome tapped the ball into the back of the net from close range.

Celebrations began before it was realised that the linesman's flag had gone up for offside.

Some poor, and hurried, passing resulted in Crewe taking the lead after just a quarter of an hour.

A Tom Lowery interception allowed the visitors to charge towards goal with Harry Darling facing a 2v1 situation, with little chance when Charlie Kirk charged forward on the right flank.

Kirk slotted a simple pass across goal, with Mikael Mandron turning and tapping the ball beyond Fisher after an initial shot was blocked by Darling, giving the home side a 1-0 lead at the 15 minutes mark.

The visitors extended their lead just five minutes later, with another close-range shot from Mandron. Warren O'Hora found himself beaten out wide, with Darling forced into a sliding block from Kirk's initial cross.

The ball was whipped back in once again by Kirk, with Mandron controlling the ball with his chest before slotting the ball past Fisher once again.

Kirk had an opportunity to extend the visitors' lead to three just before half time, collecting the ball wide open, running through on goal before O'Hora managed to get his body in his way and allowed Fisher to jump on the live ball.

The visitors entered the half-time break with a comfortable 2-0 lead.

Dons started much brighter in the second half and should've pulled within one goal after a superb passage of play with Jerome and Ethan Laird.

Laird took the ball down the right, but was almost tripped up. He managed to keep balance, weave past one defender before placing a perfectly curling pass into Jerome's feet, with the veteran striker through on goal.

Jerome pulled the ball away from Will Jaaskelainen, but the ball moved too far wide so when he took his shot in front of the open net, the ball clattered off the post - the Dons still 2-0 behind.

Moments later and Crewe themselves had a glorious opportunity to extend their lead, with Mandron playing in a racing Kirk, before Kirk pulled the ball back to Mandron, who decided to try a back heel pass to an open teammate, who can't reach it - seeing the Dons earn a goal kick and avoid a disaster.

The Dons had a chance to cause Crewe problems when Will Grigg, who was substituted on for an injured Jerome, was pulled down 30 yards out from the visitors' net.

A trick play saw O'Riley take the ball on his left, but his rising shot never threatened the Crewe keeper.

O'Riley was involved again with four minutes remaining in the match, striking a clean low volley, but his effort was blocked and sent out for a corner.

Moments later and a superb save from Jaaskelainen kept Charlie Brown from giving the Dons a goal.

Scott Fraser sent in a perfect left-footed cross, with Brown getting a well-placed header to at close range, seeing the ball narrowly tipped over the bar with Jaaskelainen at full stretch in his diving save.

Jaaskelainen was called into making another phenomenal save to keep the Dons at bay, with a Darling header looked destined for the bottom corner, only for the Finnish Under-21 international to push out as he felt into the net.

Despite the Dons' late surge, the final whistle blew on a disappointing afternoon at Stadium MK, with Crewe climbing up to just one place behind the Dons; both sides now tied at 54 points.

Just seven matches remain of the 2020/21 League One season for the Dons, with away trips to Ipswich Town and Lincoln City before a return to Stadium MK against Portsmouth on Saturday 17th April.

Securing their place around mid-table will now be the goal for Martin's side, with plenty of points still available before all is said and done.