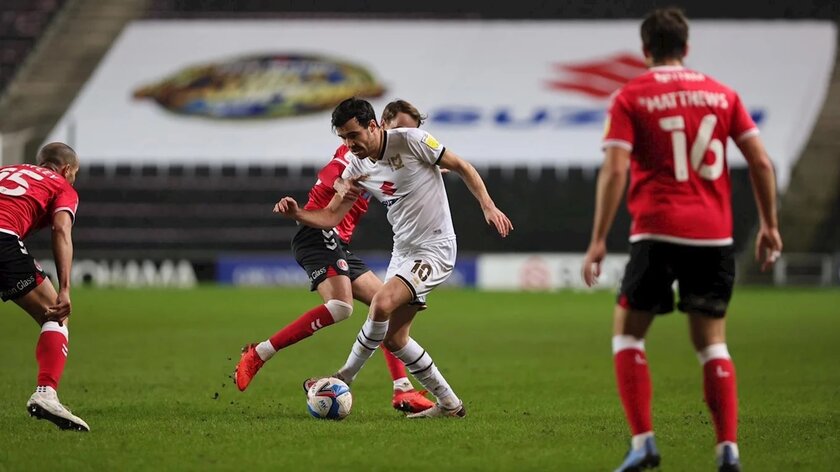 Milton Keynes Dons suffered a close 1-0 loss to Charlton Athletic after an early defensive lapse couldn't be overcome, despite their chances.

The visitors had the first real chance of the match, with Jayden Stockley rocketing a low shot from 25 yards out for goalkeeper Andrew Fisher to palm away.

After some end-to-end play from both sides, including some threatening moves from Cameron Jerome, it was Charlton that took the lead thanks to a Liam Millar strike after 19 minutes.

The Dons were caught napping, leaving opposition players wide open on the far side, allowing Connor Washington to cross unchallenged over to Millar, who slammed his shot hard and low, with Fisher having no chance as he rushed out from his line to try and get his body in the way.

The home side were denied an equaliser minutes later when Joe Mason's header, from recent signing Matt O'Riley's corner, deflected off the far-side post and Daniel Harvie narrowly missing the opportunity to tap the loose ball into the net.

Russell Martin's men grew in confidence and momentum was building for them as the first half progressed, with some positive movements in the attacking third helping to put plenty of pressure on the visitors.

Despite this, the Dons entered the half 1-0 down and with plenty to prove in the second.

The Dons started the second half brightly and had an excellent chance to cause Charlton a headache when Ethan Laird and Connor Washington clashed on the edge of the box and the home side were gifted a free kick, though it ultimately struck the wall inside the box and rolled away and out for a throw-in.

Charlton themselves earned a close-range free kick and could have extended their lead, but for the ball narrowly landing over the top of Fisher's bar.

A slight misstep from debutant Harry Darling saw the ball slip of reach and Charlton almost capitalised on the free ball, taking it down the other end of the pitch with Millar going one-on-one with Fisher, who managed to tackle the goalscorer and prevent the visitors from taking a two-goal lead.

Laird came extremely close to levelling things up, with Lewington's pass setting him up with a one-on-one with Amos, who rushed out and managed to block the youngster's shot.

Moments later and it was Gladwin's turn to try and bring the Dons back into the game, with a long range free kick narrowly going wide of the post.

The Dons had the best chances of the half, consistently piling on the pressure, but they could not convert on any of them and the visitors eeked out a 1-0 victory, with Martin's men slipping one place in the table to 16th.