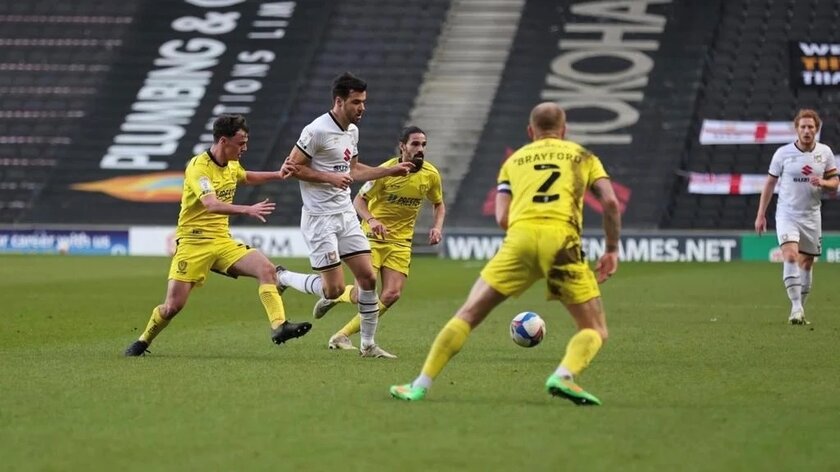 Milton Keynes Dons fought back from conceding an early goal to claim a point against Burton Albion at Stadium MK.

The Brewers took the lead after less than ten minutes but it was the Dons that looked the more likely winners after Scott Fraser coolly converted a penalty in front of 2000 home fans.

The Dons started somewhat shakily after a dominating mid-week performance, allowing Burton to get a dangerous cross into the box early and giving them another opportunity on goal inside the box before Warren O'Hora narrowly blocked the effort.

Russell Martin's side have struggled with allowing opposing teams to score early in matches and this one was no different, seeing Burton capitalise on a lucky deflection, with Colin Daniel tapping the ball into the back of the net from close range after less than ten minutes of play.

Plenty of nervy defending followed, with the visitors getting another crack at goal - seeing the long-range effort blocked by Richard Keogh throwing his body in the way.

The Dons did have their own close effort from outside the box thanks to George Williams, but saw it deflected before it could reach the goal and go out for a corner.

The home side then forced goalkeeper Kieran O'Hara into a spilled save after Scott Fraser, playing his former team, crossed out to O'Hora, who then sent the ball back into the box for Cameron Jerome to attempt to strike first time.

The Burton keeper met the ball and spilled it, but was able to recover before the Dons could react.

Jerome once again provided the Dons with an excellent chance to bring things level, with a clean cross into the box from Williams allowing the veteran striker to coolly place a shot, but his effort was denied once again by O'Hara.

O'Hara was called upon again moments later when Williams had a close-range header caught from the corner that had been earned from Jerome's effort.

The Dons grew into the first half, starting to look the more confident and threatening of the two sides, but they were unable to find the net and entered the break a goal down.

The home side started the second half the brightest, with Jerome once again involved from close range, seeing his shot cleared off the line as the Dons searched for a way to tie things up.

Fraser had the most threatening of chances just after the hour mark, with a corner finding him near the edge of the box and his rocketed shot just missing the top corner.

After playing with much more confidence, the Dons were rewarded with a penalty in the 73rd minute after Carlton Morris was taken down in the box as he wound up a shot.

Fraser was the man to step up and bring the score level for the Dons, beating his old team to score his sixth goal of the season.

Andrew Fisher was called into making a crucial save for the Dons just minutes later, with some poor defending leaving too many Burton attackers free, with Lucas Akins seeing his close-range shot blocked.

Moments later and the visitors came close yet again thanks to another defensive error, with Akins brushing past Richard Keogh and slotting a pass to Edwards who couldn't hit the target.

Lass Sorensen had a golden opportunity with a header from inside the Burton box with less than a minute left in regulation, but the on-loan midfielder couldn't guide his header towards goal. The Dane also had a shot effort from inside the box blocked moments later, with the home side continuing to pile on the pressure.

It wasn't enough, however, and the Dons earned just a point from the encounter, seeing them slip to 18th in the League One table.