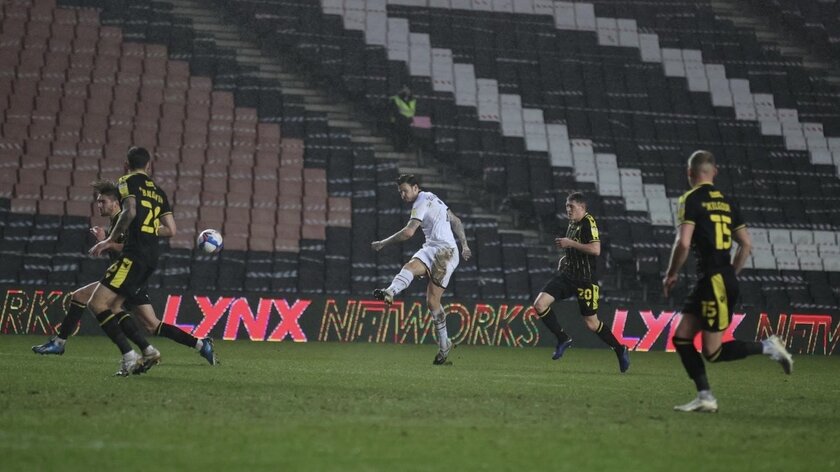 A number of changes were made to the Dons' matchday squad, with the likes of Kieran Agard and David Kasumu missing out through injuries, George Williams forced to self isolate due to track and trace and Matthew Sorinola absent through illness.

The Dons played their usual brand of possession football early on, with a great chance from Scott Fraser coming after just ten minutes of play.

Regan Poole whipped a low ball across the Rovers penalty area, with the Scottish midfielder collecting and smashing a shot at close range, seeing Van Stappershoef manage to get both hands in the way to keep the home side from opening the scoring.

The first half was largely back-and-forth between the two sides, with some nervy defensive moments from the Dons allowing Brandon Hanlan a few chances to scare, if not for the efforts of Richard Keogh and Lasse Sorensen.

The Dons' best chances came through Fraser and Ben Gladwin, who partnered well in midfield and supported Cameron Jerome, playing as a lone striker, getting some chances away in and around the visitors' box.

Already missing a number of players, the Dons were dealt another sorry injury blow when Warren O'Hora appeared to hurt himself in a scuffle with Hanlan, needing to be supported off the pitch less than five minutes before the half.

It looked as if the two sides would enter the half tied, but Gladwin was the hero with an expertly driven shot from outside the box flying into the Rovers' far top corner, catching everyone by surprise with less than minute left in time added on.

The visitors came out for the second half with intensity, using a trick play in a free kick to cause the Dons a headache - which almost worked had it not been for Andrew Fisher making some crucial saves before his teammates were able to clear the ball away.

Fisher was called into action moments later with Hanlan free to take a placed shot on the edge of the box, with the former Blackburn Rovers goalkeeper getting strong hands to it to force a corner instead.

Despite the visitors growing in confidence, the Dons extended their lead to two thanks to Scott Fraser's seventh goal of the season, with his well-placed shot coming from a perfect through ball from Cameron Jerome just after an hour of play.

Despite the game returning to a period of back-and-forth play, the Dons held on and made sure they earned their first league victory since defeating Charlton Athletic back on December 2nd.