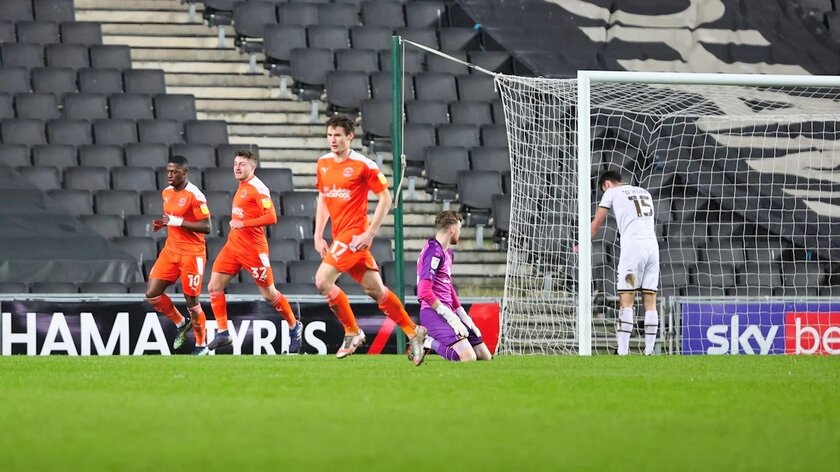 Milton Keynes Dons have lost their third league match in a row in a disappointing 1-0 loss at home to Blackpool.

A mistake in the first half gifted Blackpool with an easy goal that set the tone for the match, with the home side unable to find a way to pull things back.

The Dons had a superb chance to take an early lead, with Ethan Laird claiming a long-range pass in the penalty area, opting to square it to a wide open Cameron Jerome.

Jerome's shot was blocked close-range, deflecting out wide to Matthew Sorinola, who whipped a short cross in to Laird on the six yard box, seeing the on loan defender smash a shot over the bar.

Laird looked lively through the first 20 minutes of play, with a number of passes into the box and creative dribbles trying to create chances for the home side, but Blackpool dealt with the danger well.

Despite a flurry of pressure in the early stages of the first half, it was the visitors that struck first through Jerry Yates.

The Dons gave the ball away easily on the edge of their box, with Yates collecting a pass and rounding goalkeeper Andrew Fisher before slotting home his 12th league goal of the season, from Blackpool's first shot of the match.

Russell Martin's men tried to respond immediately, taking the ball deep into Blackpool's half, with Josh McEachren, in his first start for the club, smashing a shot wide of the post from outside of the box.

The goal gave the visitors renewed confidence and they continued to cause the Dons plenty of problems, with a close-range header narrowly going over the bar and a free kick deflecting inside the penalty area before Jerome managed to clear away the danger.

The Dons weathered the storm to prevent more disappointment, entering the half with Blackpool leading by one goal.

Both sides came out of the half lively, with some end-to-end play between them. Penalty appeals from the visitors were waved away by the referee around the 55 minute mark, as the Dons searched for a way back into the match.

In need of something different, Martin brought on Will Grigg and Louis Thompson after the hour mark, with the latter playing for the first time since suffering an injury early in February.

Jerome had a glorious opportunity to pull the Dons level, with a clean through ball from Scott Fraser allowing the veteran striker to run through on goal, but his lofted shot bounced off the crossbar, sparing Blackpool's blushes.

Minutes later and the Dons were lucky not to go 2-0 down after an O'Hora mistake allowed the Seasiders a one-on-one chance against Fisher.

The Irish centre back lost possession, forcing the Dons keeper to race off his line and put in a block down low to keep the visitors at bay.

Deep into injury time, Thompson tried to find a late equaliser with a strong shot from the edge of the Blackpool area, but it was blocked and cleared away from danger.

O'Hora took a yellow card to prevent Blackpool from extending their lead, but his efforts were for nothing as the visitors claimed all three points with just the one goal separating the two sides.

The result is now the third match in a row the Dons have lost, with Shrewsbury Town just one point behind the Milton Keynes club in 17th.

The Dons take on Accrington Stanley in the league this Saturday and will be looking to turn around this run of poor results.