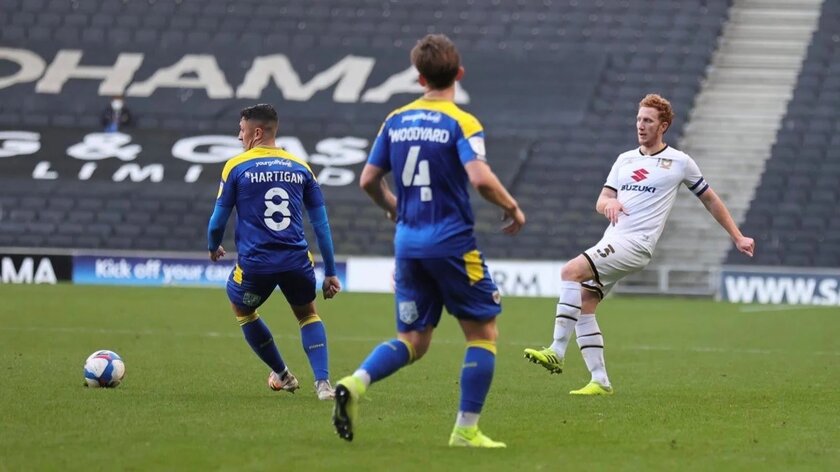 Milton Keynes Dons have claimed a point as they played out a 1-1 draw with bitter rivals AFC Wimbledon at Stadium MK.

The Dons began the match in great fashion and looked to have put themselves a goal ahead after a minute as Cameron Jerome picked up a through ball and ran clean in on goal.

He slotted the ball into the far corner of AFC's net, only to see the linesman on the far side with his flag raised for offside.

Despite their early pressure, it was the visitors that took the lead after ten minutes of play through Joe Piggott.

Piggott collected the ball deep in the Dons area and managed to avoid a last-ditch challenge from Warren O'Hora to round goalkeeper Andrew Fisher before slotting into an empty net.

The home side responded quickly, however, causing plenty of pressure around the AFC box with Jerome receiving a Stephen Walker pass deep in the area before crossing along the face of the net for Scott Fraser to tap into the visitor's net from close range, bringing the sides level once again.

Piggott threatened to put the visitors ahead once again with a close range header from a Shane McLoughlin cross narrowly going wide and hitting the side netting, much to the relief of the Dons.

The Dons themselves had a number of threatening movements into the AFC Wimbledon box, but crosses and efforts often found blue shirts.

The home side will also feel as if they deserved a penalty after Matthew Sorinola appeared to have been pushed to the ground as he ran into the box, but the referee kept his whistle in his pocket despite the Dons' furious appeals.

The two sides continued battling until the referee finally blew the whistle for half time, with the score still tied at one apiece.

The second half started fairly evenly between the two teams, until AFC Wimbledons' Steve Seddon's free header inside the box forced Dons goalkeeper Andrew Fisher into making a spectacular save to keep the score level less than ten minutes after the restart.

The Dons looked to have created an ideal opportunity for themselves after Lasse Sorensen picked out Fraser breaking forward in AFC's half.

Fraser then flicked on a perfect pass for a racing Regan Poole to collect. The rush to reach the ball clearly knocked a bit of wind out of Poole, whose first touch was heavy and allowed the visitors to regain possession and avoid a dangerous cross into the box.

Minutes later and Sorinola had a chance deep inside the box, seeing his shot narrowly roll wide of Connal Trueman's far post.

Poole was involved in a clean passage of play later on, seeing a ball whip through the AFC Wimbledon box to him at the far side. His cross back into the box couldn't find a white shirt, however, and was cleared out for a throw-in.

Fisher was once again called into action, making another excellent diving save to prevent Piggott's shot from inside the box putting the visitors ahead with less than 15 minutes left in the match.

Cameron Jerome had two late efforts from crosses to try and tip the home side ahead, but both his shots flew well over the bar.

Despite having more of the pressure late into the match, it wasn't enough to break the deadlock and both sides leave with a point each, seeing the Dons remain in 19th place in the league ahead of their Tuesday trip to Northampton Town.