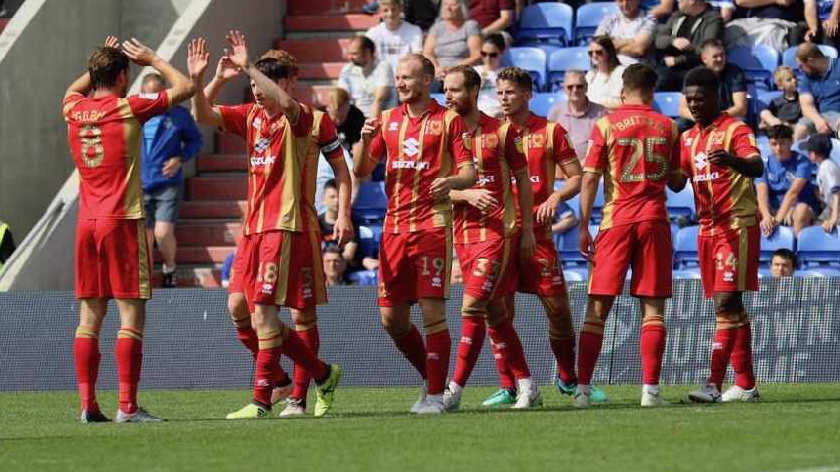 MK Dons picked up all three points thanks to a 2-1 away victory at Oldham Athletic in Paul Tisdale’s first competitive fixture in charge of the club.

The Dons took the lead after just nine minutes thanks to a Kieran Agard penalty, which had been awarded after George Williams was brought down inside the area.

Agard was heavily involved for the team’s second goal, receiving a nicely threaded pass from Alex Gilbey before playing it across the goal to debutant Ryan Harley, who slotted it into the back of the net.

Oldham’s Dan Gardner brought the home side back into the game, seeing his edge of the box shot hit the back of the net in the 40th minute.

Oldham left the pitch at half-time firmly on top, with a number of chances being stopped by goalkeeper Lee Nicholls as well as a good headed clearance from debutant Jordan Moore-Taylor.

But the Dons held firm, with Nicholls and Moore-Taylor again denying Oldham, with Sam Surridge coming close twice towards the end of the second half, while Williams, who started the game at centre-back, helped make some crucial blocks to keep the home side at bay.

It wasn’t all positive for MK Dons, however, as they saw Peter Pawlett substituted due to injury after just 14 minutes, having been fouled in the opening minute of the game.

Robbie Simpson, a recent signing by the Dons, replaced Pawlett and came close with a glancing header early in the first half, but he too was forced off in the 86th minute of the game due to injury with Ousseynou Cisse replacing him for the final five minutes of the match.

Conor McGrandles was also stretchered off during the game, having suffered an eye injury, and is being assessed by the MK Dons medical staff.

Despite the injury troubles, Tisdale's Dons held on and claimed all three points - ensuring a positive start to the 2018/19 League Two campaign.