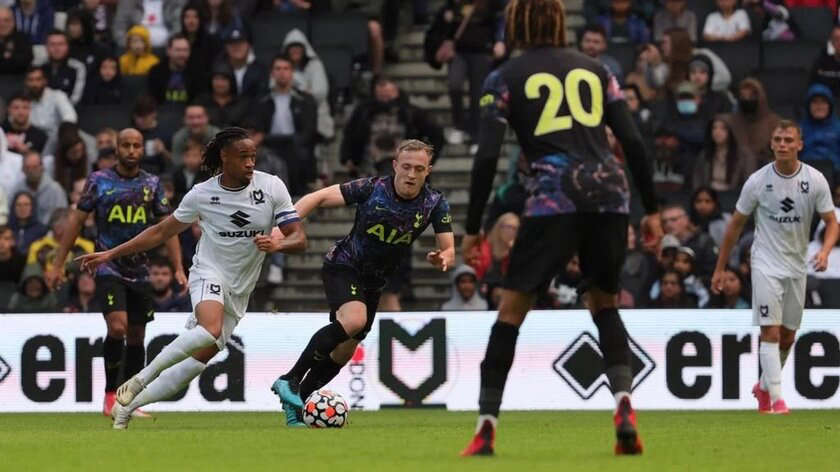 Milton Keynes Dons wrapped up their pre-season preparations with a spirited 3-1 loss against Premier League side Tottenham Hotspur at Stadium MK.

The match, contested in front of a crowd of nearly 16,000, saw the return of former Dons academy graduate and star Dele Alli, who was handed the captains armband by the visitors.

With stalwart Dean Lewington starting on the bench, another youth product of the Dons was handed captaincy duties with David Kasumu receiving the honour.

While the Premier League club started the brighter of the two sides, with Steven Bergwijn sending a low curling shot just past Franco Ravizzoli's far post early on, Tennai Watson gave the Dons an early opportunity in the visitor's box.

The right back chased down the ball before sending a clean cross into the box. After a defender header, goalkeeper Alfie Whiteman punched the ball out for a corner.

The Dons had the best opportunity to take an early lead when Scott Twine was taken out by Whiteman just minutes later in the Spurs penalty box, with the referee having no other choice than to point to the spot.

Matt O'Riley took the spot kick but it was hit low and centrally, with Whiteman able to get his body behind it and see it curl away from danger and out for another corner.

The visitors had an opportunity to push themselves ahead when Reguilon found himself wide open on the left flank, sending a deep ball to Son Heung-Min, who saw a close range effort fly well over the bar.

The two sides shared positive movements as the first half progressed, with the ball being taken down both ends of the pitch and plenty of blocks being put in by both sets of defenders.

The Premier League side thought they had taken the lead after just over 20 minutes, when Son Heung-Min lifted the ball over Ravizzoli and into the far corner, but the linesman's flag was held firmly aloft to signal offside - much to the relief of the home side.

In an almost mirror image, Son opened the scoring for the visitors. Cutting in from the right flank to loft the ball over Ravizzoli's shoulder, giving Tottenham a 1-0 lead after 35 minutes of play.

Tottenham had a chance to increase their lead as Bergwijn and Lucas Moura broke with just Warren O'Hora in front of them. A delay in their play allowed the Dons centre back to get a block in and avert the danger.

Scott Twine came close to levelling things up after earning a free kick 30 yards away from goal. Taking the shot himself, the ball dipped perfectly over the defensive wall and Whiteman was forced into making a superb diving saving low to his right, pushing the ball out for a corner.

The Dons had a spirited effort throughout the first half, but entered the break1-0 down thanks to Son's effort.

Russell Martin's side started the second half brightly, pushing into the Spurs area on multiple occasions, with Mo Eisa collecting the ball deep in the box but unable to get a shot away under pressure.

Ravizzoli was called into action with a threatening pass chipped over the Dons defence, with Son lurking around the six-yard box. The Argentinian goalkeeper averted the danger with a solid punch clear.

The keeper was involved again as Son had another opportunity mirroring his previous efforts. This time, however, Ravizzoli stood firm and blocked the effort to keep the home side within one.

Twine attempted to pull the Dons level, seeing a low-driven shot from the edge of the box pulled narrowly wide just minutes later.

It was the Premier League outfit that scored the next goal, however, as Son slotted a pass to a wide open Dele, who coolly placed his shot out of reach of Ravizzoli - hitting the back of the net in front of the home fans.

Ravizzoli put in a couple of big stops following the second goal, tipping away a Bergwijn effort from close range before making a superb diving save from a headed effort. Dele attempted to tap in at the far post but the former Dons man was called for offside.

Twine had yet another strong free kick effort saved by Whiteman, further frustrating the Dons who were unlucky not to find the net themselves.

After a flurry of substitutions just past the hour mark, Watson had a superb cross into the Spurs box but no one could get a head to it as the Dons continued to search for an opening.

A way in looked further and further out of reach after Lucas Moura intercepted a pass, charged in alone on goal and slotted home beyond Laurie Walker's reach to put the London club 3-0 ahead with less than ten minutes remaining in the match.

Their patience paid off, however, as John Freeman finally found a way past Whiteman. Ilunga tapped the ball forward for Freeman to hit on the half volley, lofting the ball over the keeper's head to pull the home side within two again.

Unfortunately, there wasn't enough time for the Dons to pull themselves further back into the match, with the visitors finishing with a 3-1 victory.

It was a spirited display from the home side, who were unlucky not to score with many of their chances, and they should head into the start of the 2021/22 season with high morale and confidence as they look to make their mark on the League One standings.

Ravizzoli earned himself the Man of the Match award after some exceptional saves and will likely remain as the side's starting goalkeeper while Andrew Fisher is sidelined with injury.

Twine was also a particular bright spark and will prove to be quite a handful against third tier opposition this coming season, especially from set pieces - going close with both of his free kick efforts in this one.

With no points up for grabs, the match was a positive warm-up for the Dons, despite the score line, and the return of Dele for the first time since departing Stadium MK back in 2015 was a special occasion that fans from both teams enjoyed.