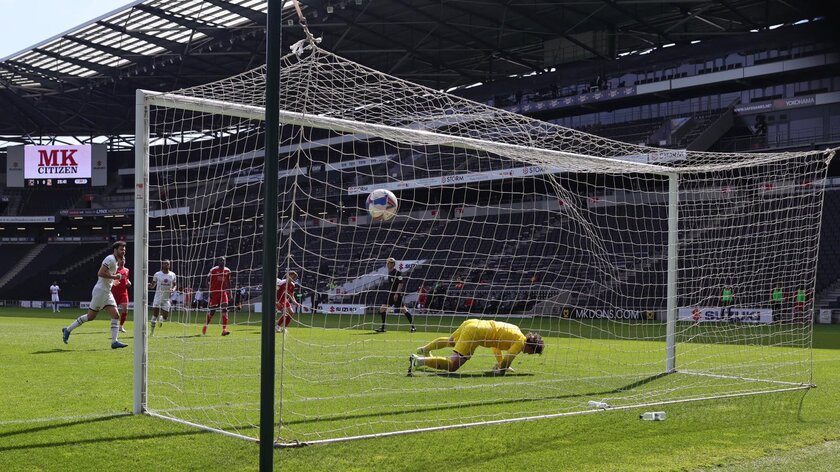 Will Grigg netted four times as Milton Keynes Dons claimed one of their most convincing wins of the season against Swindon Town.

The visitors arrived at Stadium MK needing a win, but have suffered the ultimate fate of relegation after Russell Martin's side romped to a 5-0 score-line thanks largely to on-loan striker Grigg's masterclass.

The Dons started brightly, getting balls into the Swindon box a number of times in the opening eight minutes of play, with Scott Fraser almost connecting with a perfectly lofted cross from Matt O'Riley.

Fraser came close to opening the scoring once again when Matthew Sorinola sent a speedy ball across the face of goal, with the Scottish midfielder once again narrowly missing the ball and seeing it whiz away from danger, with Will Grigg also lurking nearby.

Grigg and Fraser combined to give the home side the lead after just 15 minutes, with the latter chasing down a long ball over the top from Dean Lewington.

Fraser collected the ball, with a defender close by, and was able to get a pass across to a wide open Grigg, who slotted home his fifth goal for the Dons since joining on loan in January.

The Dons maintained pressure on the struggling Swindon, putting the ball into the penalty area and causing problems, ultimately leading to a penalty in the 26th minute.

After a corner bounced around in the Swindon box, Zak Jules attempted a close-range shot, seeing his effort blocked by outstretched hands of a Swindon player, with the referee having no choice but to award the spot kick.

Fraser stepped up, as he has done all season, and sent Camp the wrong way to register his 14th league goal of the season and give the Dons a 2-0 lead before half an hour had even been played.

The second Dons goal appeared to give the visitors a wake-up call, as they began to show some teeth with some threatening offensive movements as the half progressed.

Tyler Smith could have pulled Swindon within one after a cross managed to find the striker wide-open in the Dons penalty area, but the on-loan Sheffield United man sent his shot high over the crossbar.

A free kick 30 yards out also threatened the Dons' clean sheet, sailing inches wide of Fisher's near-side post with less than five minutes remaining in the first half.

Swindon's growing efforts were put down thanks to Grigg's second of the match, coming deep into stoppage time. A corner, earned by Sorinola, ended up on the far side of the penalty area, with Jules retaining possession.

The big centre back sent the ball back into the centre of the box, with Grigg able to swipe a shot beyond the reach of Camp, giving him three in his last two and six on the season - sending the home side in at the break with a comfortable lead.

The second half could not have started better for the Dons, who extended their lead to 4-0, with Grigg earning his hat trick goal.

The Dons attacked right from the off, with Fraser and Sorinola threatening on the left before finding an open David Kasumu, who slotted a perfect ball back through to Fraser deep in the Swindon box.

Fraser managed to roll a cross into the path of a sliding, outstretched Grigg, who connected enough to see the ball cross the line.

Grigg didn't have to wait much longer to extend his scoring, with a simple, well-placed shot from inside the Swindon area giving him four goals and the Dons a 5-0 lead after just four minutes of play in the second half.

Despite taking such a dominating lead, the Dons did not let up and continued to search for more in front of goal, with Andrew Surman seeing a shot from the edge of the box cleared off the line after a clean Ethan Laird pass was pulled back to him.

Surman was involved again on the 64th minute mark, with Fraser's excellent run into the box allowing him to pull a simple pass back to the veteran midfielder, who had acres of space to shoot but saw his effort fly over the bar.

Matt O'Riley could've added a sixth for the Dons with just over 15 minutes remaining in the match, seeing his effort from inside the area deflected out for a corner.

Camp pulled off a superb save late in the match, denying Ethan Laird a goal when he tipped the on-loan Manchester United defender's strong header onto the crossbar.

There was nothing the Robins could do to delay their inevitable fate, with the Dons putting in one of the most comfortable performances of the season to clinch another three points - helping them to climb to ninth in the League One table.

Just two matches remain for the Dons, who are on course to finish in a very strong position just one season after finishing 19th, with Fleetwood Town and Rochdale the last tams up for the Milton Keynes Club.